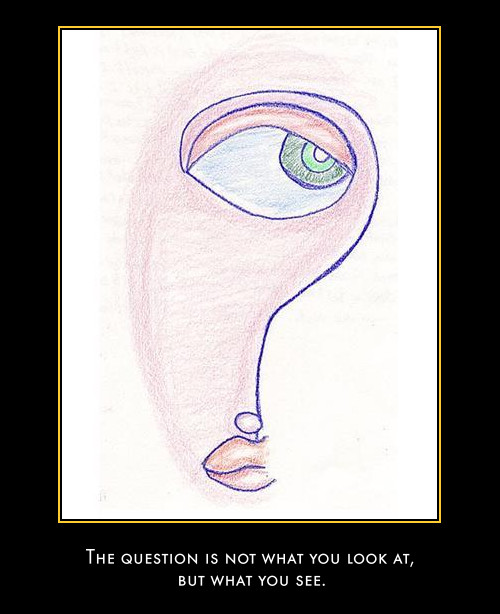 
Upgrading SAR to 5635 proved fruitful. Now again 5570 comes into play . Break and close below it has bearish implications. One can manage trade with 5570 as intraday SAR and ride the downwave. 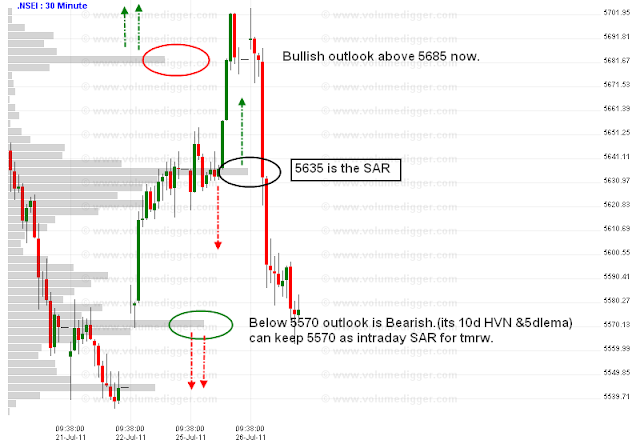 
Now upgrade the SAR to 5635 from 5570 and manage trade. Please go through the detailed insight below. 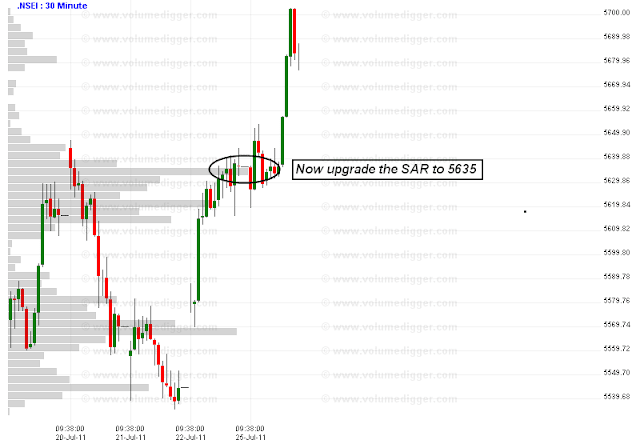 Nifty is at an important juncture of trading which may decide the short term as well as medium term trend in this week or two. It seems to be coming out of consolidation, now whether it is sustainable or will give a false breakout to sink later is to be seen. Let us check out the Technical insight-

The Daily chart shows Neutral to Positive indicators with MACD ready to give a Buy signal. The  Bollinger Bands show support now at 5600 level and initial resistance at 5700 level apprx. 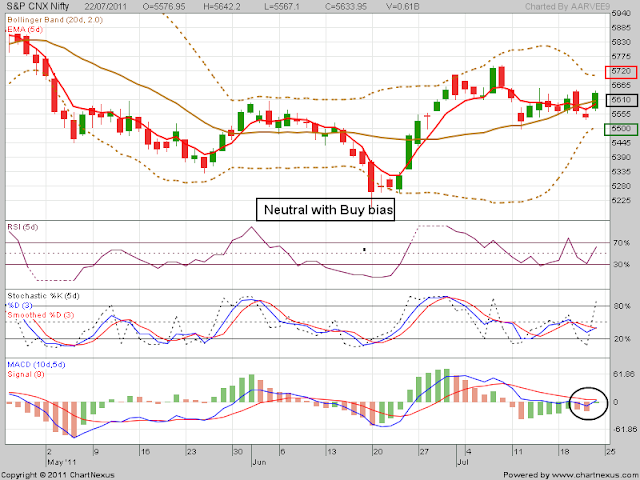 The Weekly chart also shows apprx. 5600 level as support and a top level of near 5900 . But the indicatiors have moved to Overbought levels which may remain there for sometime before giving a sell signal. 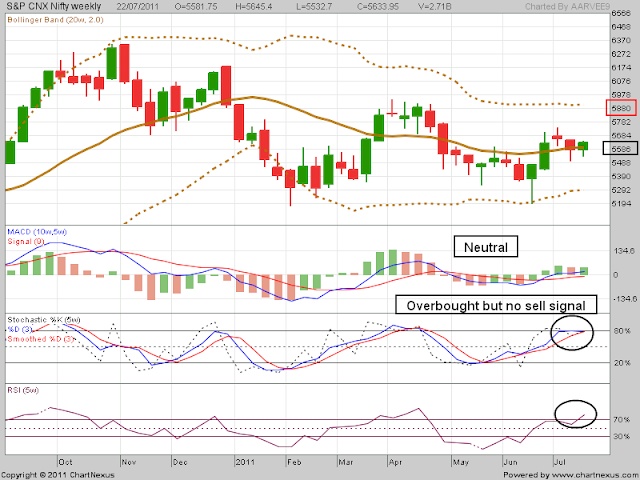 The Larger pattern is that of a Triangle and within it now trading in a Rising Wedge. The wedge gave a false breakdown to move back into the pattern. Normally a false breakout causes a fast move in other direction which is fuelled by covering of positions by the trapped players. Now the Triangle Top trendline near 5675 and that of Wedge at apprx. 5800 levels will provide Resistance. 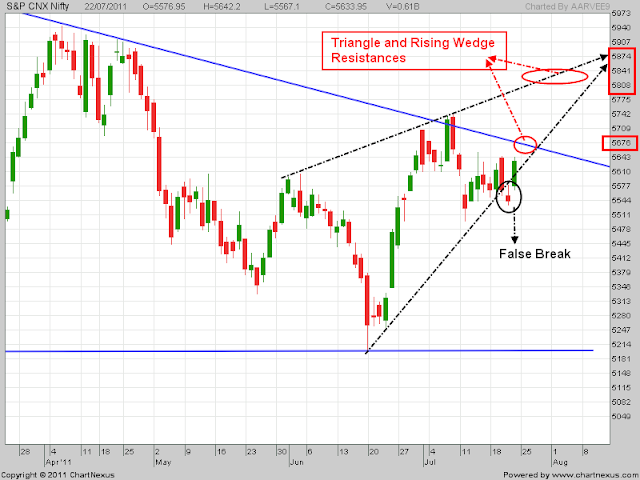 Trading above Triangle trendline may trap people in Bullish sentiments only to fall in the Bearish Rising Wedge.

The prices are moving largely between the 50dma and 200dma which are bearishly aligned. Above 5650/60 level prices may get resisted at 200dma level of 5715 apprx.

The important levels for trade are marked in the Weekly ema chart below. 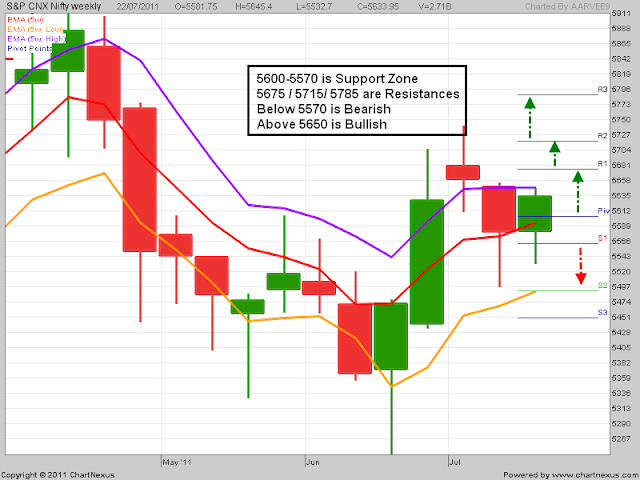 The short term moving averages of 5-20dema seems to give a Fast Rise scenario after coming near and breaking away bullishly. 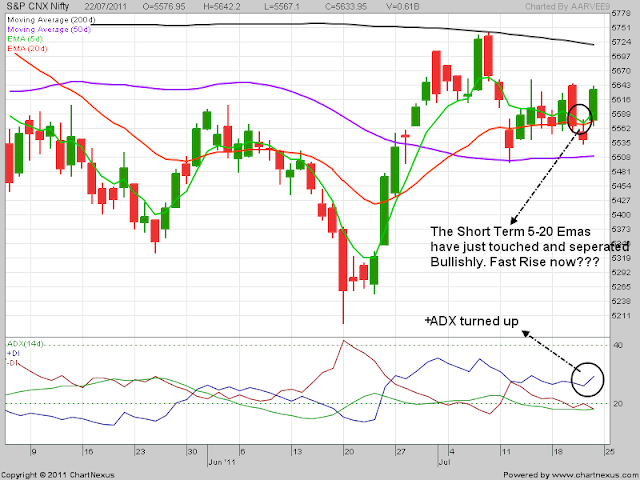 The 5500 level proved to be a solid support as indicated in earlier posts. Now 5800 level looks like final resistance for the series. 5600 level seems to have been taken out indicated by Put O.I. exceeding Calls at this strike but 5700 still remains a resistance as of now. 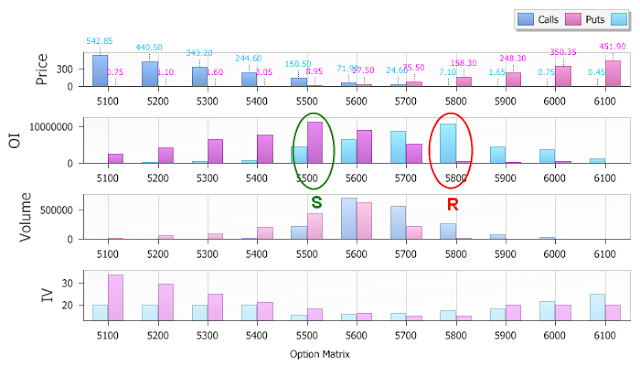 The EW counts tends to give a sense of direction and likely targets if the going is right.

Please go through the last short term EW probability post -  Click Here .
As indicated in the post - " Resistance to this upmove comes initially at 5650 level and then at 5680-5725 band. And ,The Preferred count in Red, indicates a correction from 5680-5725 band that may be held by 5500 level Support and then an upmove to break the Resistances of this band."
The correction down came from 5650 level last week and got supported near 5530 level.

The larger B wave of the second zigzag Y ( Click here for the Long Term count) may have ended the second leg down of wave b (squared). 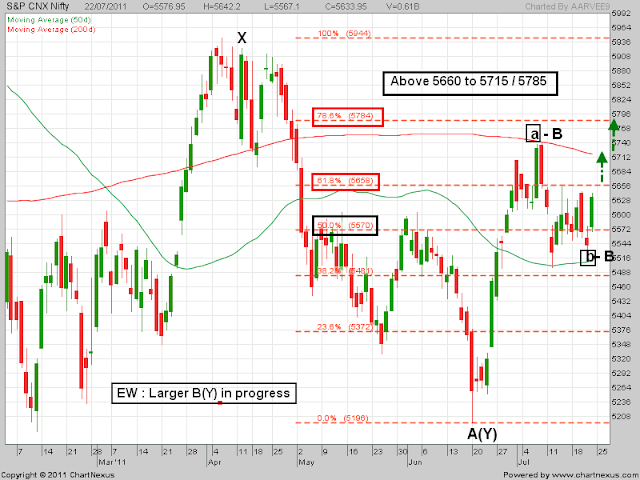 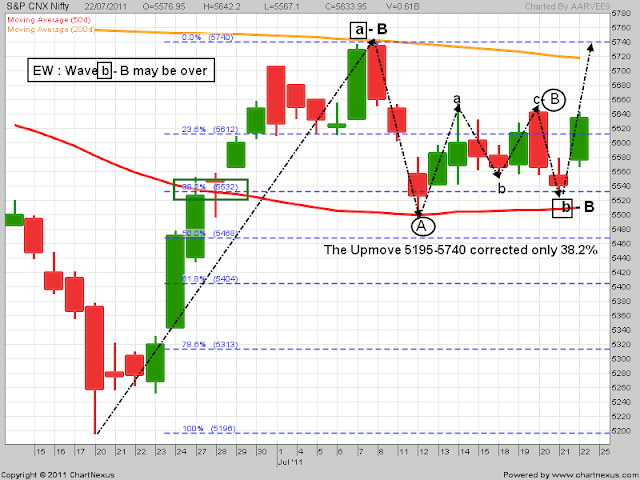 This may be the upmove which may suck all with the bullish sentiments to start the larger C (Y) down.

3. Any break of 5570 now may be quite Bearish. One may trade keeping this level as SAR. 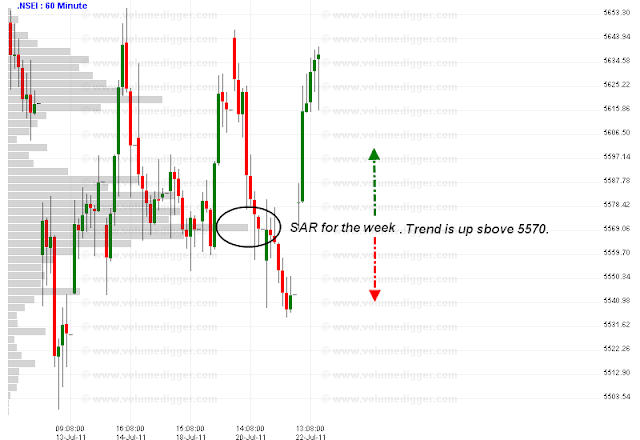 Bias is towards long now but cautious trading required to avoid getting trapped as indicated.

Crystal clear analysis as always, good work...keep it up.

This fall seems to be a buying opportunity

Its proving quite difficult to trade as per positional view.So i am just following the price action with SAR and keeping positions very light.

It has given a false brekdown below 5550 last week and now above 5650 yesterday.So no trading against ST trend in anticipation of any side direction.

I was watching a triangle on hourly charts from the 57xx highs. Should ideally stay above 5500 for upside break. So if it gets close to there I think there is an opportunity.

I will post EW update on weekend.
But looks like the wave c-B up is invalidated.This may be b-B ending but now more indicators pointing towards larger C's Third wave.
-Weekly indicators have given sell.
-close is below dlema and 50dma.
-5-20dmea have bearishly crossed.
-rising wedge broken and followed up down.
-close below HVN 5570

My system is down below 5635 as mentioned earlier this week in update.

Your SAR worked very well & i am also keenly awaiting for ur latest update.

I try to give a definite view based on my favourite indicators but also take care that it may go the other way too at some critical juncture.
The top trendline of the triangle was a resistance so i updated the SAR for a chance of reversal here.
It did well :))
Ur contra view was quite good and shows ur experience and depth.