Let us check out the short term probabilities for Nifty trading based on Elliott Wave analysis and corelating it with other TA methods to get an insight of what is in store and a Trading Strategy to gain out of it.

1. Please go through the basic EW insight that I have been following - Reference EW Post.

We are currently in the larger 'c' wave down of the 4th wave on the long term charts. 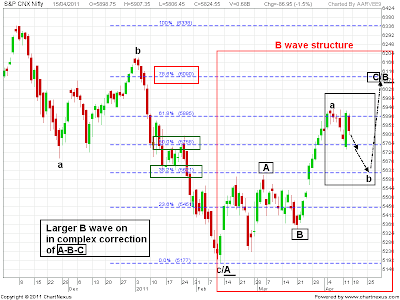 3.This 'B' wave is unfolding in a complex three wave structure ( There is an alternation within a complex correction ) 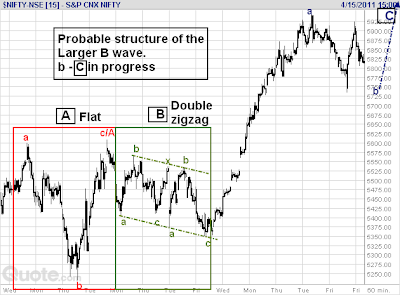 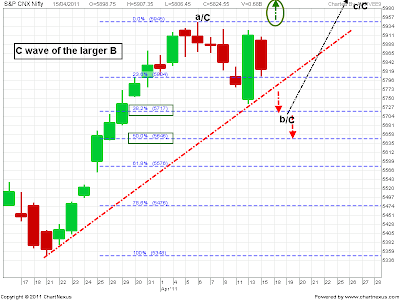 5. This 'b' wave is also trading in a three wave structure and we are in the last leg down which may terminate near apprx. 5720 level or below (if a=c) 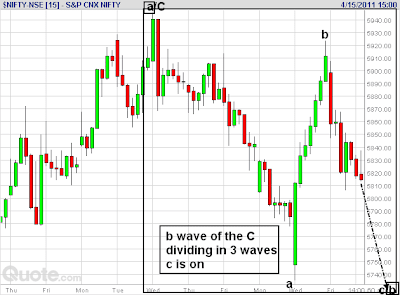 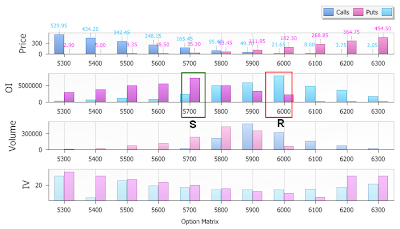 7. The Trendline joining 6338-6182 has proved to be a Resistance till now after the recent breakout above 5600 level. 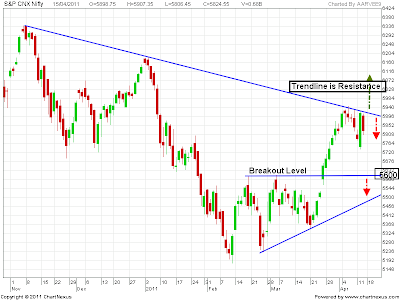 1. The short term bias is down.

3. Positional Longs only above recent Pivot High of apprx. 5945 level with immediate target of 6100. (One may enter longs with s/l on trendline break and then position size above the 5945 level)

4. Making it simple , one may keep 5830 level as SAR for short term and manage with booking out at important levels. 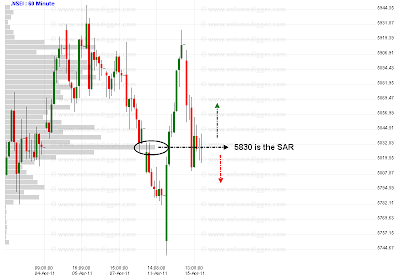 5. An important Moving Average of 200dma is nearing the short term target area. This level will play important role in resolving the short term trading . Any break below it will signal weakness , but holding above it will give another try of recent high and further.
If breaks and holds ,one may keep 200dma level as SAR on closing basis for further trading. Also be prepared for a whipsaw or two at this level. 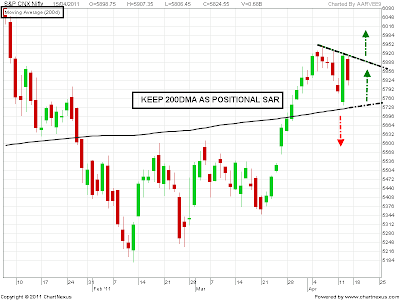 6. 5600 will be a game changer level .The 'B' Wave count will end below it and will bring alternate count into play where the larger 'B' wave ends at last pivot high and 'C' down begins with a target of apprx. 4800 . One may again be short below 5600 level with appropriate S/L. 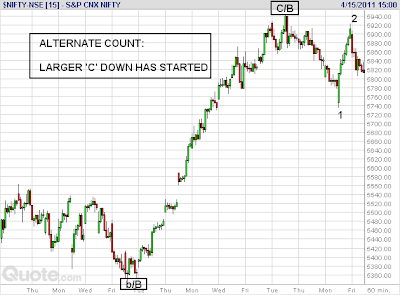 Will update at important levels. Have a profitable Week ahead .

what is the reason for 6K nothing but me prepared one chart with bullish bias (since 5735 level) "as time pass" :) :D

Nice ,trying ur hands at charts.

Ya a five wave impulse count where we may be in ivth of the third wave or 4th wave is possible.

U may consider it as 4th wave and if u go by 1-2-i-ii-iii-iv labelling it will only be part of the 3rd wave.

I felt the 'a' of the C as a three wave structure rather than 5 wave one .hence taking this 'C of the larger B' as three wave one.

as per ur count b hit tgt of 5720, but i guess its not the end here as wave b cant be smaller than wave a time wise!!
i think we are to see some complex action here
regards