This will be my Reference Post for the trading in various Time Frames. Essentially it is the 'Surfing' of the 'Waves' and reaching an objective conclusion to understand what is in store for the future. 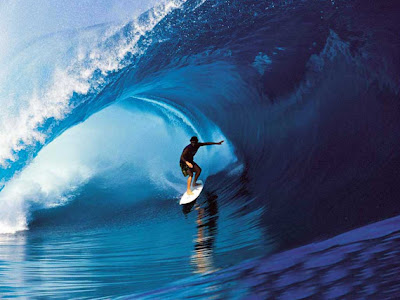 Waves are a source of delight and they can also cause enormous destruction. We need to understand how they form and  how they propagate and find ways to harness their energy safely.

The 'circle' marked portion of the charts are enlarged in the subsequent chart to understand the incremental progression.

1. In the Long Term Chart , we are trading in the 4th wave since the ending of the 3rd wave at Jan 2008 highs. It implies that we are in a correction phase of a larger Bull market which has a pending multi year 5th to come. 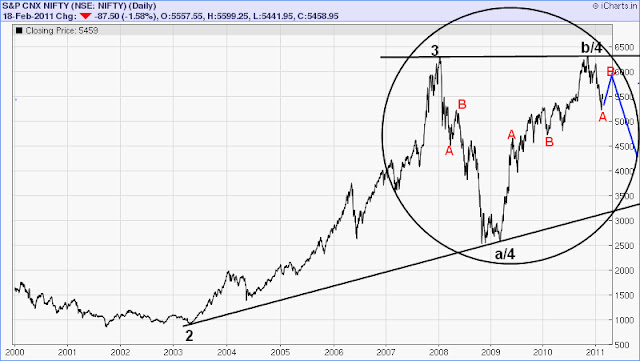 2. This 4th wave may end up trading in an Ascending Triangle pattern that we get by joining the lows till now of the 2nd and 4th wave.

"Triangles appear to reflect a balance of forces, causing a sideways movement that is usually associated with decreasing volume and volatility. Triangles contain five overlapping waves that subdivide 3-3-3-3-3 and are labeled a-b-c-d-e." - EWI 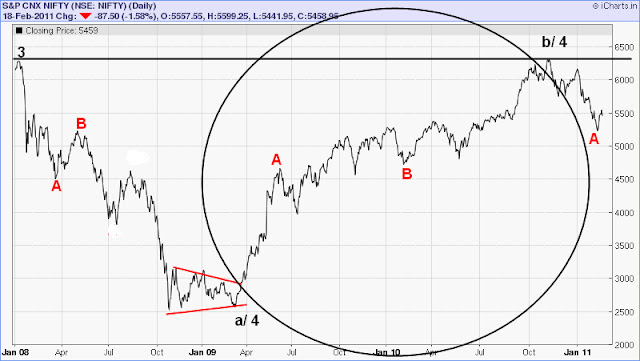 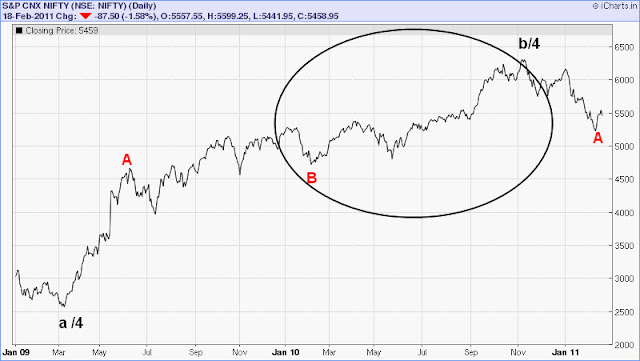 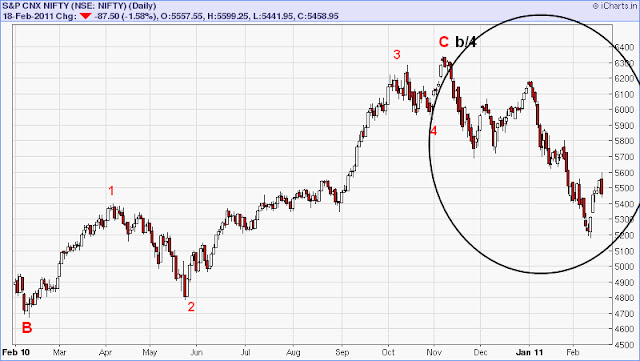 6. Since the Top of 6338 we may have started 'c' wave of the 4th down. As per the pattern it should also unfold in three waves down.We may have completed the 'A' wave of this c/4 at recent low of 5177, or we may be in the last leg (5th/c) of this 'A' wave.These probabilities are shown in charts below- 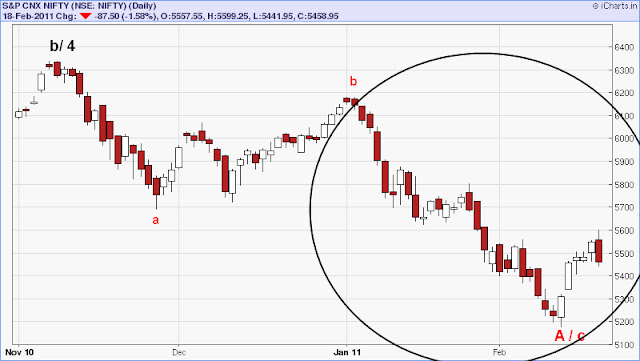 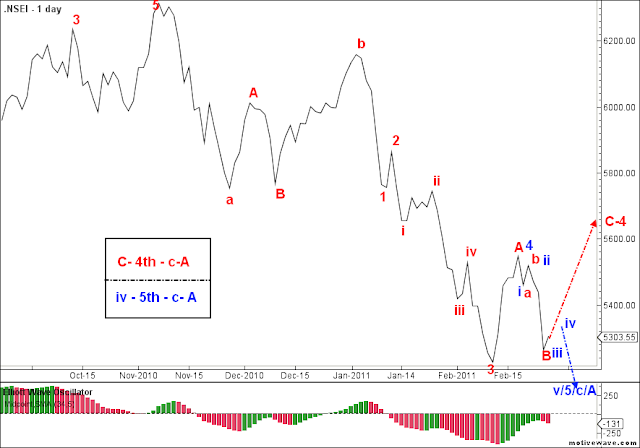 The Short term Alternatives of this c /4th will be discussed in detail in the next post.

1. The Long Term scenario indicates that we have made a Top at 6338 / Nov.'10 levels.
It may be few years that we travel in c,d,e waves of the 4th and cross this Top again.But a big 5th remains pending for the upmove after that.
Also check a previous post - Long-term-analysis

2. In the Medium term ,Since the b/4th may be over ,we may remain in a downtrend below 6338 levels . It may be a Sell on Rise type positional scenario ,till we trade it to completion.

3. In The Short term, either we have completed the wave 'A' of the c/4 or are near doing it with a low pending .Alternate count may be that we have entered the 'B' wave of the c/4 up and may target near 5800-6000 levels .(Targets to be discussed in next post).
The last Short term analysis achieved Its target .Check Post- Short-term-analysis

nice work .. keep it up..
i know your counts are very valid, but check "http://technically--speaking.blogspot.com/2010/11/nifty-long-term-view.html" as well for another possibility.. let me know what you feel about it.

U got a nice blog going.

We confirm upto wave 3 ,now as per time analysis, that wave 4 normally takes longer time than wave 3,(which is of 5years approx),i have subdivided the wave 4 in 'abcde' ,which will take longer than 5 years( three over till now).

EW counts/analysts normally dont cofirm with each other, is the hard rule (perhaps the hardest) that Mr.Elliot missed to mention. :))

keep going for the ABC correction of the larger count ,it may be similar in structure to this one.

I am a strong believer of benner cycle, which predicts a major low around 2015-2018 (the time here is debatable) for atleast US markets. please check how robert precter sees dow wave counts for the same..

also i would like to disagree with your assumption of wave 4 taking larger time than 3. there is no such "hard" rule suggested by elliot. also the rise from 2250 to 6340 which have happened shows a 5 wave structure! if you look at banknifty a major contributor of nifty.. it will be more clear 5 wave..

the fall from november clearly is looking to be a 5 wave.. which means it can have deeper impact in shorter term..

in any case we will be following it on a regular basis and thing will automatically become clear!

thanks for appreciating.. you too keep on the good work!

Tarique,
-I told u the hardest rule before:)
-I am a strong believer of my own counts with flexibility of points of invalidation because i trade what i count.
-Pretcher has been wrong before also.and so has everbody one time or other
-The rise from 2250-6338 is not in clear 5waves though one may fit it into that.Its more of a three wave upmove structure.
-We r talking nifty and not bank nifty here,so no point in following it to validate nifty count.
-Ya fall from nov. can be treated as in 3rd down now.

Nice to know ur views.
regards