Trying to analyze the Market structure and Probabilities in three Time Frames ,Long Term ,Medium Term and Short Term for the benefit of different types of Traders and Investors.The posts are to be read keeping in mind the corresponding Time Frames.

This time frame corresponds to the view for a Year and more.

The Moving Averages are lagging in nature but definitive Indicators as they are derived directly from Prices and hence represent the function of Price better than any other Indicator.
Prices are trading below the 200dma mark .Since March 2009 there have been three occasions when prices were near or below this mark .The first was a near touch and go ,second was a whipsaw and now third looks to have some pain in store. 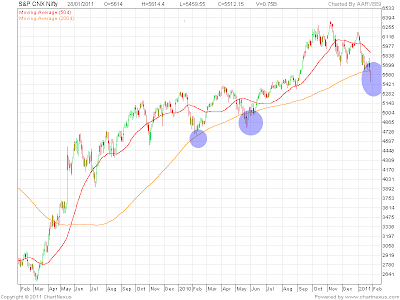 The Indicators in Monthly charts are showing weakness for the first time since this upmove began in March '09. In all the corrections before, the indicators were steady in overbought region . The Journey down has began. 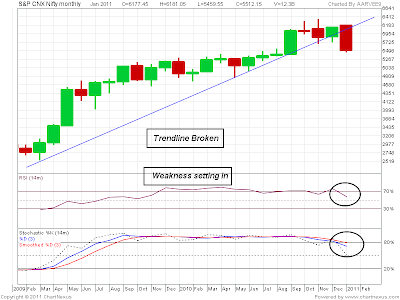 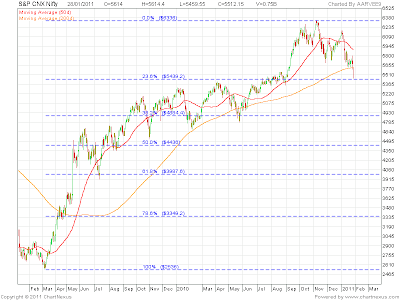 4800 levels is a 38.2% correction in this chart and can be expected to unfold in long term.
EW Probability :
I am following a chart marked since year 2000 . The top made at 2008 was the end of the larger wave 3 and since then we are moving in wave 4th .The wave 4th may take an ascending triangle pattern in next few years . The March 2009 was the end of the 'A' wave for this 4th and recent top could be the 'B' wave.We may be trading in the 'C'wave of this long term count now. 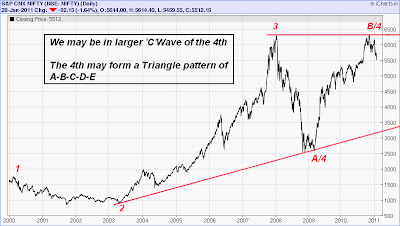 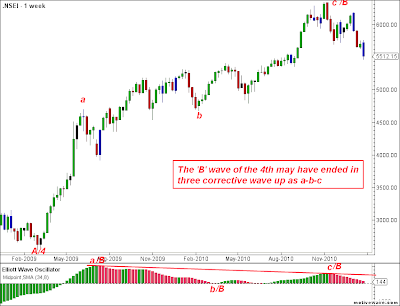 I was introduced to the Elliot wave oscillator Indicator in the above chart by  dear Jazz (TheProfileTrader). It seems to correspond with the EW count .

The Long Term scenario suggests that it may be years before we see a new top now and prices may consolidate in a range with higher bottoms in the down waves (C & E)  of  a larger A-B-C-D-E pattern. Plan the investments accordingly.
Posted by AAR VEE at 4:38 PM

oh Man! you left no chance for bull):

wah bhai rv. excellent analysis and presentation.
fii's shud read it. they will write india off
for 3-4 years. am i reading u thoughts correctly.

Hi RV
I think I should close down my blog and keep an eye on the "third eye" only!
Great analysis :)

@Anuj
Now the "Teacher" can be used for drowning the sorrows (gham galat karne ke liye) instead of celebrations.
:)

A few points from my side. I understand very little of EW. Whatever little I learnt from iLango sir.

Given the fact that wave-3 has been swift in less than 5 years and the correction to this wave-3 has already got A(in less than 1 year) and B(in about 2 years) about 3 years. They say, a bear market that corrects the previous impulse / motive wave has to spend much more time than in the impulse wave. Therefore, your A-B-C-D-E seems quite befitting. But my worry is can it drag for at-least 3 more years (>5 years)? Is our economy that bad? Or there is something even more we don't see today!

Your analysis looks excellent. I hope it makes one to be cautious during market hours.

They say that u can analyze the data in the way you wanna see the market ,may be I am biased on the short side but that's it u have to have conviction to trade a side .Importanat is the execution of that conviction by proper money management and position sizing.
I will change once the data compels me too.

Ya may be a couple of years but then in a triangle it will still trade averagely above 5000 levels and consolidate,so great time for trading and value buying ,SIP etc. A big multi year 5th will come then :))

After all those chart scanning the 'eye' needs to be tested along with the back ,shoulder and fingers.I may close down before u :))

Whats in Dehradun that bloggers ,students and teachers are saying cheers :)Nifty 50 to be renamed Teachers 50

It is the temperature man! Below 15 degrees - Bulls or bears, it is always cheers. :)

Thanks for correcting my short term chart .
dont know much about the time analysis part of the EW.Ya but heard that 4th is often longer than wave 3rd and sometimes even more than wave 0-3 time wise.so as u say that if 3rd is for 5years 4th A+B already for 3 years ,so we may be looking at say more than a couple of years.

I dont know the fundatmentals of economy ,because i look at all the economic data that comes out with skeptism here and US both.Looks more like a trap layed with help of media.Like to take the view that price factors everything.

ya its time to be cautious ,but overall great time to trade and invest when extremes will occur .Trading with trend will always help.

Thanks Mihir for all the good words.

At JN You said,"Bullish Friends may be disappointed :("

At present from trading point of view,considering the 10% fall, any immediate rise up to 5750 will be best shorting opportunity is my simple understanding,though Nifty shall cross 200 DMA then.

Dear RV,
In as much as I do not follow EW, I do tend to look out for the HNS And IHNS theory in detail.There r gaps left open on the upside as well as the downside.Yes, I do see them. I also see the RUN AWAY OPEN GAP which never got filled= when the CONGRESS GOVERMENT came to power, and as they say= for mrkts to move up, all downside gaps must be closed, hence I do see a downside trgts upto 3600- 4300 range.
Regards
deepak

Nice analysis. Just a small insight, Nifty/sensex made lows in Oct 08, while your analysis is starting from March 09 lows (which was higher than Oct 08 lows).

Any reason for not considering Oct 08 as start of this rally?

Ya well said,we should trade the markets as they look based on facts .The Bua bear or the Uncle Bull.

Till now i am unable to get 5000 and sub levels will review near the technical levels and can then comment based to data available .Lets take it in the stride and trade the screen keep the insight available.

Thanks Sanjay,
have a nice week ahead.

Usually u wont find two EW chartist getting the same counts in the subwaves .:))

Yes equally it can be treated as wave 1 and 2 of the subwave a of the B in the said period but i preferred an ending diagonal scenario of the subwave c of the wave A, as ending diagonals occur in waves 5 and c and tend to give violent move in opposite directions and hence the march09 impulse move.

I prefer keeping EW as the light house to steady my positional trade boat in the direction of the trend.Points of invalidation helps to keep stops or reverse the trade.

Aar Vee
its always a pleasure to see,read,understand and trade your analysis.
thanks man for your hard work. it help us a lot.
keep going...
thank you so much

Thanks and welcome,
Happy to know that I am of some help.

Lets watch the sea and count wave by wave.:)