Nifty reacted from the resistance zone of 5225-5265 as seen in the last post . The downside was not much and almost paired the losses completely. Now let us check the probability that may be unfolding in the short term - 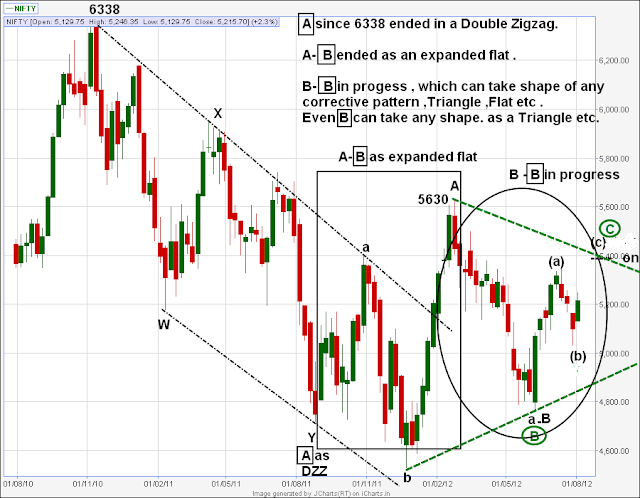 The subwave B may assume any corrective pattern (most likely being a Triangle) . If it is a Triangle (Green count ) it may have completed its A and B and now trading subwaves of C.
If any other pattern is to unfold , it may be in its B subwave only and now in c-b-B. (Black count). 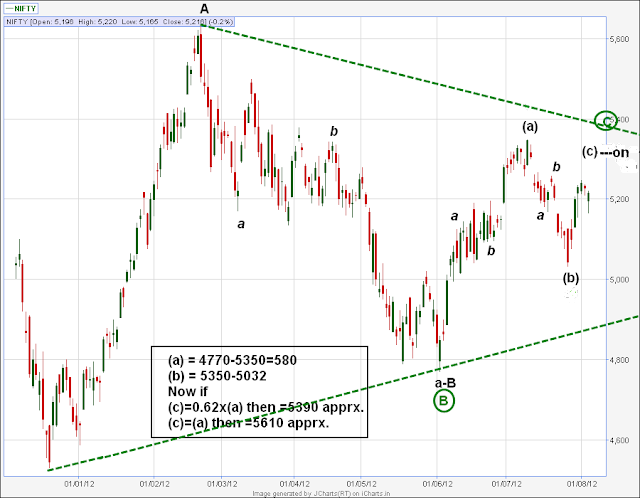 Now the Triangle probability suggests that its in c-C of it and a likely target of 5380-95 ( by c=.62a and blue count below  ), from which a reaction for downside may come .
If we close above 5400 , we may be in a probable Flat pattern of the subwave C going for higher targets . 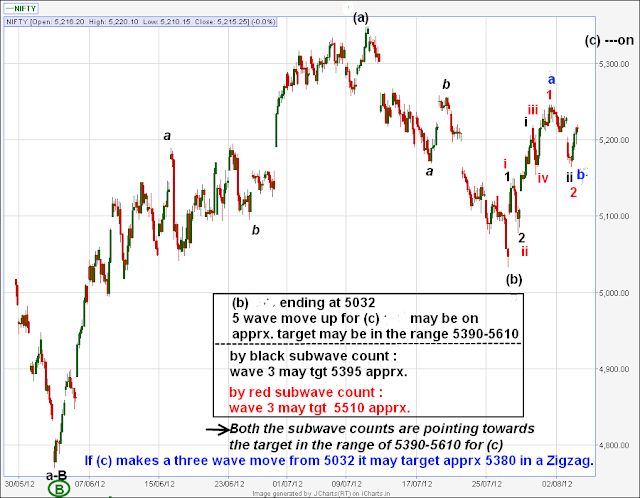 If the last session low of 5165 holds and we cross 5246 , we may be going for the probable target zone of 5380-95 . A close above 5400 will be quite bullish for even higher targets. Downside below 5165 only . Caution is required in trading because of a B wave and its unassuming characteristics .

Its always a pleasure to see ur unbiased post & counts, thanx for ur wonderful artistic work.

Simple yet effective. Thanks a ton!

Thanks for following regularly .

Thanks for encouraging and leaving positive comments

Corrective combinations can throw up various valid patterns. They get clear only in hindsight .One may follow any valid count as long as the market moves with validation of levels for trading .

Thanks for sharing ur perspective.

Ya looks upside in short term and may go above the swing high of 5349.

Thanks for going through the post.Regards

Yes, I use EW only for confirmation now. I remember starting out wid Prechter exactly 1 yr ago under ur guidance :-)

Nowdays, tho i have devised my own system to ENTER NEW trade, based lossely on Ilango's Hi-Lo EMAs . Call it SMO SAR..

Probability 1. A = DZZ ,B = Triangle.(Now in its C, green count ),Larger C down to come after completion of Triangle in D and E.

Probability 3. (A)=DZZ , A-(B)= Expanded flat now in B-(B) to take any corrective shape ( may be in c-b-B ,black count ,to be tuned further ). C -(B) to go up then larger C down to come. Will take more time in corrective time wise before any big move.

Probability 4 - Double three , W done as DZZ ,X done as expanded flat now Y for any shape from 5630.It will mark end of corrective phase from 6338.
check chart at - http://aar-vee.blogspot.in/2012/07/elliott-wave-ta-update-for-nifty.html


Basically the Primary count after A done as DZZ , the move is of corrective B (with many alternatives in my order of preference above) and the Alternate count as double three corrective where we end the correction and move up in few months time .

one supporting view of ur triangle frm jan 2008. pretcher writes that wave c is complicated usually. it seems to be happening.

A negative divergence is being formed on nifty daily so i guess even if we open up higher tomorrow , we will in all likelihood drift down again towards 5270-300 levels before resuming the upmove towards 5800-900 again.

Flat in the larger B wave is different count than that of C of a triangle in B wave . Above 5400 the chances of invalidation of triangle and Flat in larger B increases ,though it can still form an ascending triangle with c ending near 5610. Till now the C from 4770 looks a zigzag so probability of triangle is alive.

Please also share ur counts with the probabilities u have mentioned .

To be frank Aarve the current structure is very complicated and difficult to analyze but is you observe closely in the short term from march to the current move of 5350 then it resembles something of a inverted HnS pattern which targets 5450-60 over the next few days.So my guess is we are likely to see a dip and then move to 5450 either tomorrow or in 3-4 days.Also forming a channel on the current upmove it looks very likely that we will hit 5600++ in a few days.

I would like to know from neowave experts if they can see 5600-800 coming by august 28 or not.My timing models are always a suspect but lets see how it pans out.

yes rv, flat and triangle in b from 4720/4728 are 2 probablities.
i was just quoting frm pretcher that in both labelling there is deviation frm what pretcher has written if flat b is 78% a, ideal for zz, and if a triangle wave a of triangle never observed by him as flat.

Shailesh: What's your take on the major C? Still on your old count double corrective in larger degree?

I am thinking of chances of major C probably ending at 5033 recently, the last (fifth or seventh of C) being a neutral triangle that started at the high of 56xx. Need 6k in 5 weeks for validation or below 49xx for invalidation. Me being another prejudiced bull, hoping for the former as of now.

I really dont understand complex equations as everyone ,PS,ARVEE,Kartik has given, I try to figure those out to get an alternate count but get lost in to those equations and not able to understand so I have decided to keep it simple and go ahead ,
I had never said that this larger C is a double corrective , I always maintain that this is a terminal impulse starting 6338 ,6357-2539 being A , 2539-6338 being B and from 6338 a terminal has started , I had also explained to yu in the mail that when A and B are equal C can fail and if it fails it has to be terminal chapter 5th and chater 11th of neely but the problem here which has arised is that even if it fails then also the c shud end below 4887 ie .382(6338-2539), I dont have a clue that whether the final C should end in the territory or if any part say 3rd of the C has entered that area(4695) and 5th fails above the 4887 area is allowed or not.
I have seen eg of such things happening in equity and it is called severe failure, but logically I dont seem to fall for this as i am a prejudiced bull so I wud wait for 4887 to be breached and accd to me this can only happen if there is a double failure like 5630-4770 A , 4770-5378 - B and 5378 -4885 could be C , this is theory count but my prefered count being this correction come to around 5279-5246-5225 area and from there continue with the rally towards 5624 ending b wave and then going for the 5c wave which may also fail around 5225-5137
This is a structure , which is like a castle built in dreams , God willing if it comes out to be true we wud be heading for 6338 by 2nd qtr of 2013

Shailesh: I was referring to your earlier count that this is the X after the major C ending at 4685. Is this still valid?

From the above it appears that you are now seeing the C as still on..

Yes yu are right accd to me I have gone one step back and maintain that C is still on , actually if yu see some charts like Sbi 1571-2475 was required to create a terminal , also look at defty 2960-3967 was required again to create a terminal where nifty had already created one and thats why nifty also created a 4th wave which converted its formation from an 5th extension terminal to an 3rd extension terminal with 5th wave failure as 4th is bigger in size than 2nd is conducive for a 5th wave failure,which previously I was thinking as A of the X wave , so nifty postponed its jump towards 6338 as the terminal C is still not over as 5th is still in the making, So still if even nifty comes to 5624 and if conditions then are not ripe for an early jump towards 6338 then the fall from 5624 wud be a corrective and give way to create a triangle in 5th wave which is accepted theoriticaly or if conditions are conducive for a jump c wud be an terminal impulse again and wud end around 5225-5137 and starts its spurt towards 6338.
Let us see what the almighty has in store for us.

Though nifty could stop at 5630 or so I don't think it will crash before 5800 or so.once it reAches 5800 the flooR Would fall beneath

I know karthik why you are bend on saying that 5800 will come ,is beacause you are taking in to consideration the higher bottom of 4531 and 4770 ie of around 239 pts and yu add it to the top of 5630 and then yu are asumming that a fall wud come where yu are subtracting 5944-5800 ie and adding it to the bottom of 4531 to around 4300 ,I agree that complex things in our life has simple answers and I love keeping it simple but i dont expect such a simple solution , I dont expect nifty to crash beyond 4857 in the worst of cicumstances if 5630 ia attained , it cud breach the bottom of 4531 a little or may touch 4885 or for that matter 4857 if 5390 is not crossed, not otherwise.

@shailesh often things are more simpler than we imagine them to be.unless I see evidence contrary to it , I would still stick with my view of nifty 5800 and then the floor falling beneath without warning .i think we should not look at India in isolation but also look at other markets for broader perspective.snp and Dow in my opinion are nearing their top and snp may not go much above 1422 though Dow in all probability will make a new marginal five year high around 13400 or so.what comes after that will take many by surprise .

In technical analysis if the particular scrip or an index or commodity is to be analysed and if itis widely and thickly traded then nothing comes without a warning ,for eg yu cud see a 5th wave failure, a terminal a truncated formation or an ending or leading diagonal which is simmilar to a terminal or adoble failure etc

Thanks All for sharing ur views.