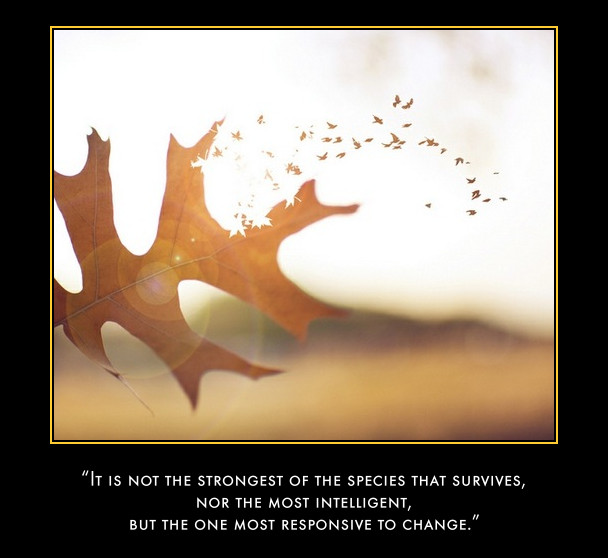 Markets reacted from apprx. the Resistance zone given in last post of 5380-95. Now the closes after that have been above 5300 and the down sessions have been on comparable lower volumes. The Weekly close has been neutral . Lets check out the probabilities and factors supporting both the causes.

1. Elliott wave analysis throws up a short term Bearish probability which may turn out further Bearish in medium term . Check the charts below carefully with observations in each .

We may be trading in a larger Time Frame B wave that may be a Triangle ( or alternatively a Flat ) . 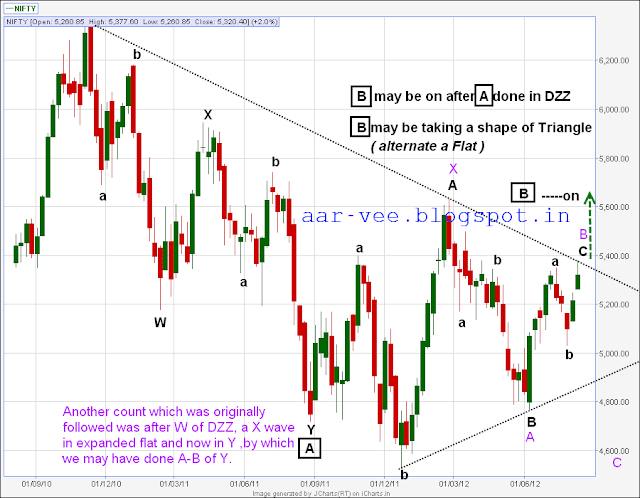 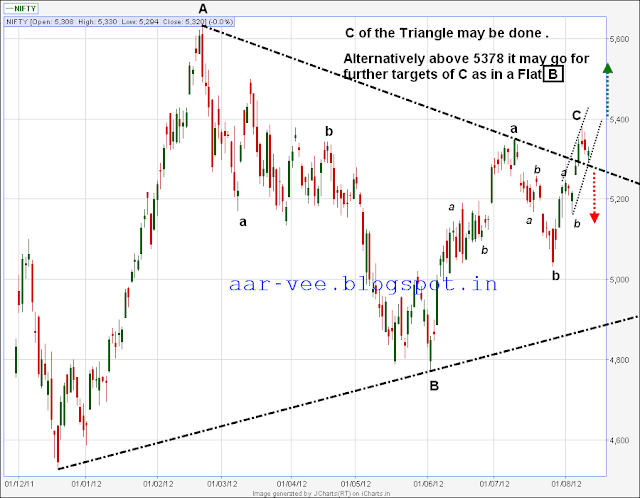 We may have started the new leg down completing wave 1 of it. 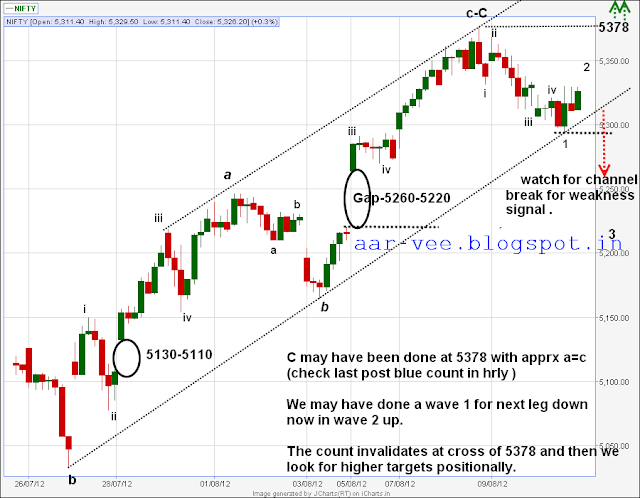 We may be in the wave 2 (if correction is going deeper ) or alternately wave B ( for a shallow correction ) . 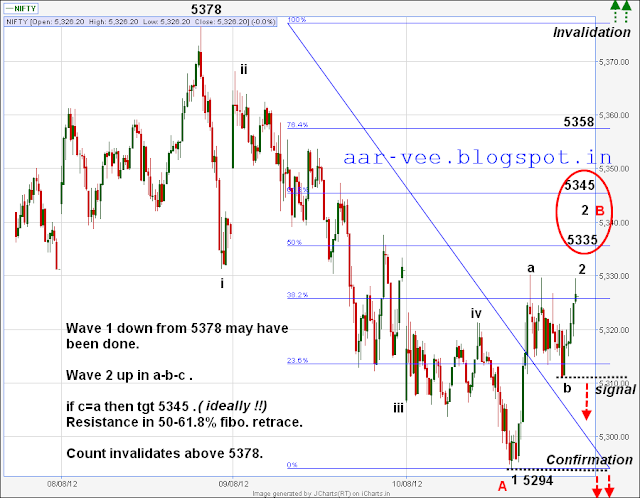 The above bearish view invalidates above 5378 and we then look for higher targets of the c-C  as in previous post  (now may be doing 1-2, i-ii from 5032 for bullish counts or a v-c left for completion of the C ) --- Check Here.

2.  The Targets down if we correct below 5378 may be these Fibonacci retraces and Gap fill . 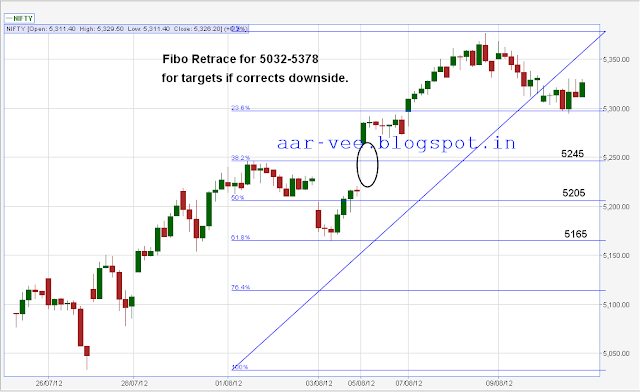 3. The Options data as of now is supportive of the correction below 5400 with supports near 5100 and 5200 . The Open interest of 5400 calls being higher than that of 5300 puts and Support now developing near 5200 with addition in puts there in the last session .

The VIX and Weekly ADX are at rock bottom values suggesting bigger move to come ahead which has higher probability of being down as of now . 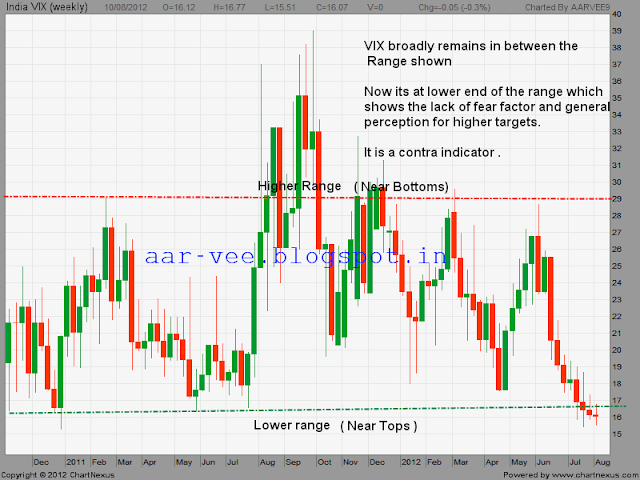 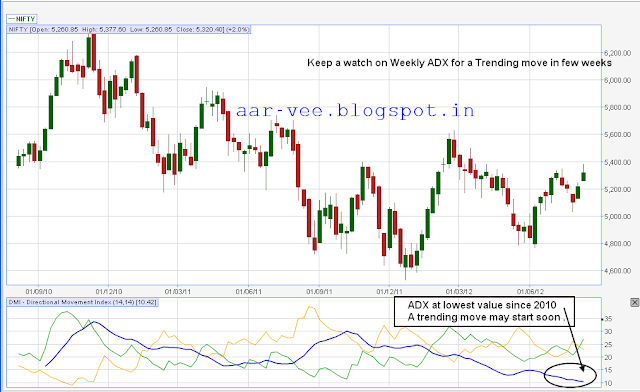 The  Bullish Pattern on the hourly chart of Inverse Head and Shoulders is a caution. 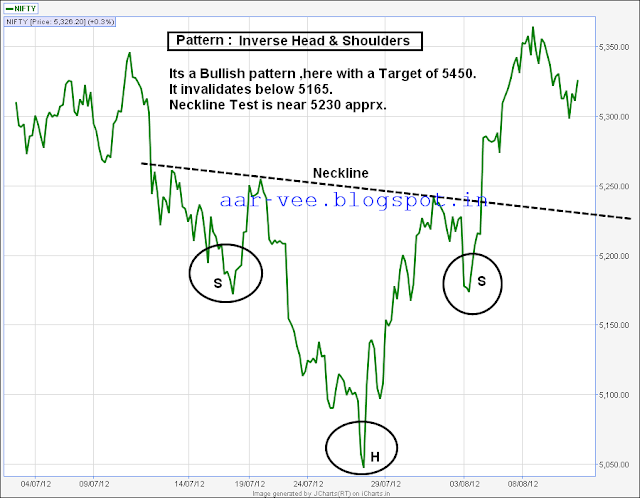 The important Moving Averages for Long Term now show a Bullish alignment after 2010. 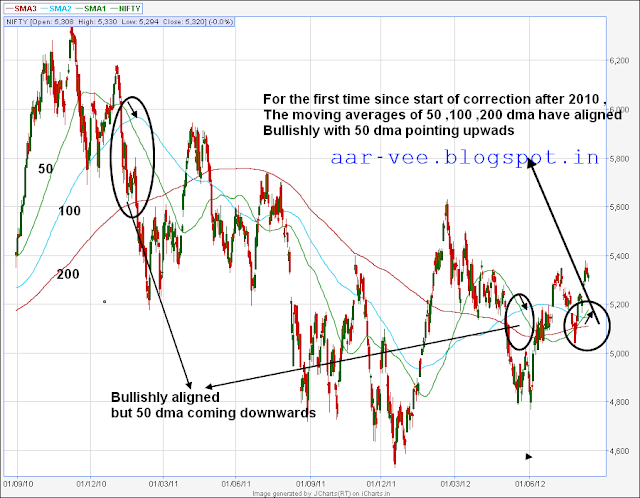 In the Stock Market , Liquidity is the primary mover  and this rally since start of 2012 is backed by FII inflows and can invalidate the bearish view as it shows no sign of letting the steam off . 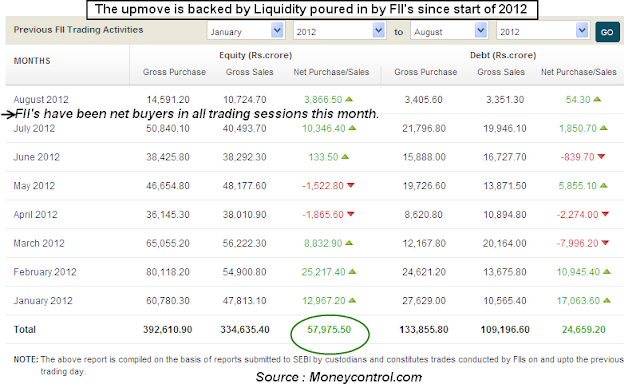 3.  The probabilities of correction being a shallow to end near apprx 5200 or below it for a larger one in Medium Term equally exists.

4. Long term Bullish indicators cannot be ignored till they give reversal signals .

We review as we move near important levels mentioned above.


Trade with Price signals and Caution ahead .
Posted by AAR VEE at 9:04 PM

Thanks for continous support and good wishes.

Thanks for going through it and leaving ur comment.

1. Option data has changed significantly today with 5300 puts exceeding the 5400 calls . Aggresive writing at 5300 pe when near to 5300 level and unwinding of 5400 ce later are bullish signal. We now should check its followup.

2. Good addition of 4% in NF with todays upmove.

3. 5320 now is the level to be watched on clsoing basis for upmove to sustain. Bearish below it and bullish above it on closing basis.

4. EW has moved to complete the min requirement of an a-b-c move from Fridays low. 5378 remains invalidation of this count.Confirmation below 5294.

Thanks for ur views and update .

EW UPDATE :
-------------------------
The short term bearish probability was invalidated by crossing 5378 in last session though signals against it started coming on mondays trading session itself and likewise obeservations updated eod.

Now considering the move from 5032 as a 5 wave move up( calculations as mentioned in last post), we may now move positionally to 5450 ,5510and later above 5610-80 in this series/first week next series.

One should now keep 5320 as positional s/l on closing basis and follow the trend till invalidates.

Thanks for your regular and timely update sir.

The EW count may not be a 5 wave move up from 5032 but may be a double or triple ZZ in formation. The move today and subwave counts are not fitting in a regular 5 wave move.Will try and review detailed counts on weekend.

But still the trend is up with positional s/l at 5320 as suggested from last two trading sessions .

I have posted an article on Nifty Future would like your review comments
http://tradingniftyoptions.blogspot.in/2012/08/decision-point-nifty-future-trading.html