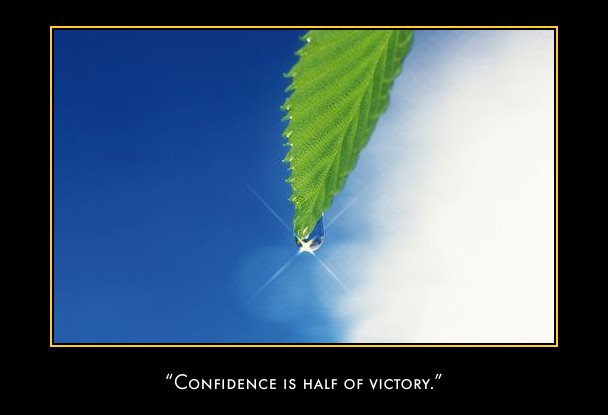 First session of the last week took out the Monthly low of 5169 till then, bringing in weakness and trapping series long which culminated in the series expiry towards the low and in the process whipsawed the 200dma /5095 on closing basis on expiry day . Lets now see the technical picture in different time frames - 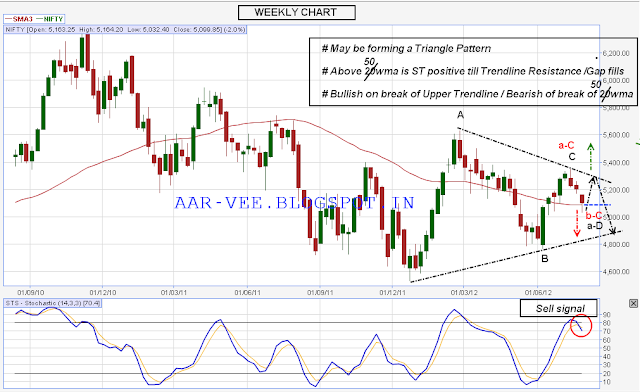 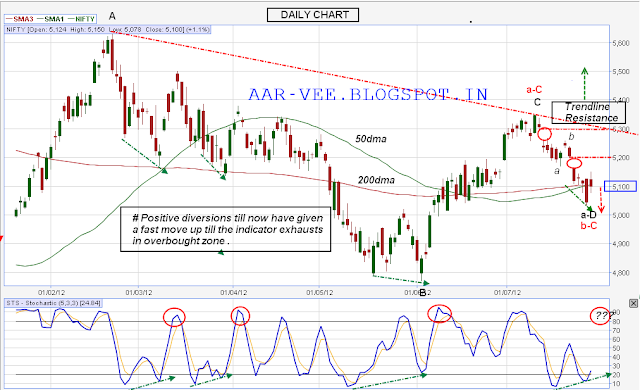 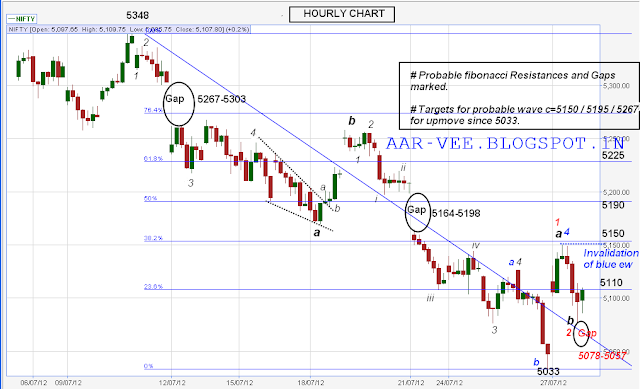 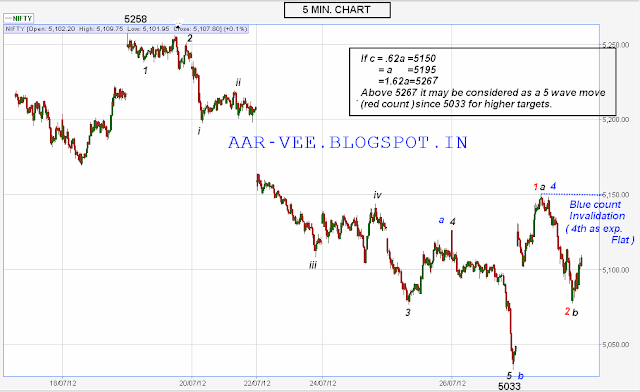 The short term bias is turning up with 5100 to act as pivot level on closing basis . The Resistances come at apprx. 5200 /5225/5265 & 5300 on the upside . Above 5348 on closing basis the medium term bias will also turn positive. Caution is required at resistance levels specailly in the 5225-65 zone. On close below 5100 the bias turns bearish for the short term with a probable move towards the lower trendline of the larger Triangle pattern. Trade with caution this week .
Posted by AAR VEE at 8:26 PM

sir.. as usual great analysis.. am trying to get back into markets.. ur analysis truly helps..

Looks like Triangle is not possible in the larger degree... however should fix and convince for the month of august and september....

Thanks and welcome back.

Thanks for the good wishes .

Pl leave ur name and reasoning in the comment .

ok rv, then this triangle is x wave instead of flat and then z down ??

From 6338-4720 it is a double zigzag (DZZ). from 4720 starts the wave A of triangle which previously i was marking as wave X ( check in sidebar posts or below ones)and alternate as this A. Now u can consider this triangle "if made" as a whole a larger B where DZZ is A then C down to come or even it can be taken as X after DZZ.

On 7th july I had left a comment that godwilling i expect 5137/5034 by 19th july and then the market shud turn , the point of 5034 turned out to be true but timing was missed it turned out to be 26th july , now 19th july was new moon day, a gann turning date but it missed that and turned out to be 26th july which was again a gann date ie first quarter date and somebody was discussing NRT , now accd to me I agree with KRG that though I dont know what NRT is I came across a gann analyst who said that yu cannot pinpoint the gann date by standing on the riverside , yu shud take a jump in the river and get in to its flow so automatically yu start getting the dates right that means as time passed by i was waiting for 5034 to come as it was nearing the .618 mark ie 4991 and when it came on the 1st quarter date ie 5034 i knew it was it and I grabbed that oppurtunity , and that must be the logic of NRT ie swim with the flow and without the help of Gann it is difficult to arrive at a timing , now the logic is that this rally shud take yu to around 5617 in around 21/26/34 days time ie by 24/8,31/8,8/8 , keep on swimming with the tide and when around 5617 is acheived look at other indicators like momentum and if they suggest weakness get out for a round to again to 5297/5137 target, preferably 5137 this wave being 5c

shailesh ji, it shud trend any side for traders to make something if not down then up.. so be it..
u do gann too...

I guess there is a surprise waiting in store for everyone.Markets will spring a surprise in a few weeks.

Shailesh your earlier target of 5034 was good.Please keep sharing your thoughts regularly.

I have had an prejudice always towards bulls so I myself is always cautious , There is other school of thought who think that this rally may not yield very much ie peter out around 5328 and from there in a double combination may break the 4531 low , the label being from 5630 3rd wave of C of the 1st extension terminal has started and first abc may end at 5033 with a double failure and this is the x wave and second abc may start from 5328 and go below 4531 a little completing the 3rd wave of the terminal and then the fourth and fifth.......
This school of thought cannot be denied as there is no timing restriction on a terminal and a triangle so be cautious while 5328 is approaching though I believe myself that 5617 should reach
let us see what is in store for us.............godwilling

Shailesh i think markets will zoom up tomorrow to to break the 5328 barrier and easily move towards 5600-5800++ levels within the next 2-4 weeks.The surprise comes in the last week of August...most likely August 28th.

No breakout but instead we had brakes on :-(.Now most likely nifty will drift down towards 5080-5120 till next Tuesday and from thereon pick rally towards 5600 to 5800.

Despite all the bearish talk and news, we are still above the critical 4990. The triangle on the larger degree looks good; but, being another prejudiced bull I feel we are ready to end the triangle with an upside break... not downside..validation 6k in 5 weeks...invalidation 49xx... Fingers and everything else crossed.....

On NRT and earlier discussion on wave theory vs trading; here is the link
for the latest neowave question of the Week

Thanks Shailesh ,Karthikg ,PS and KGR for sharing their valuable trading inputs .