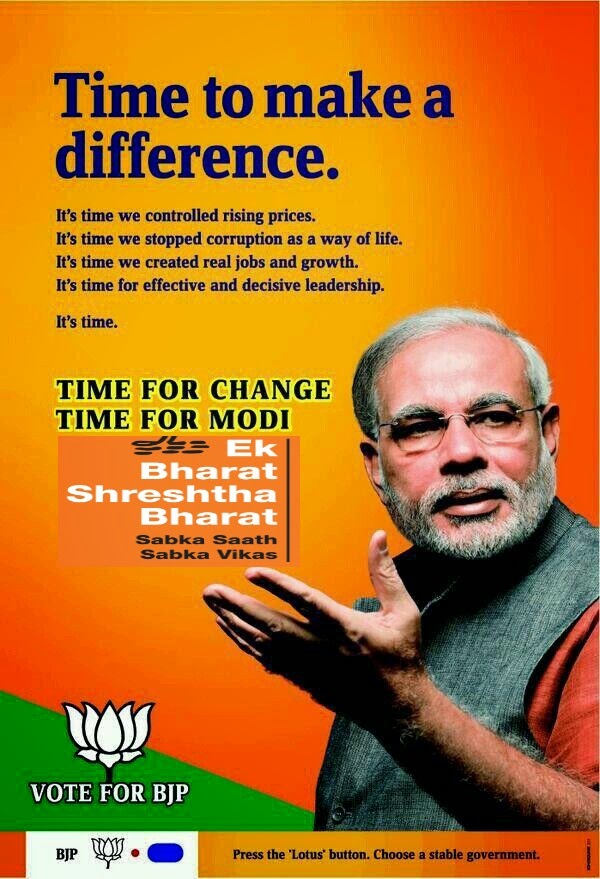 Good Days are round the corner for the prudent Technical Traders. Lets check out- Why ?

General Election 2014 Results are poised for May 16th which may give a good move in the Short Term and clear the Major Trend ahead for the Medium Term Time Frame.

Check the Technical Probabilities ahead -

We have been following a Bullish Probability for Long Term TF, the last update for which was in this Post :  EW for Nifty .
There has been no invalidation of the Trend as such.

Further update on this Probability . Read the observations on charts carefully - 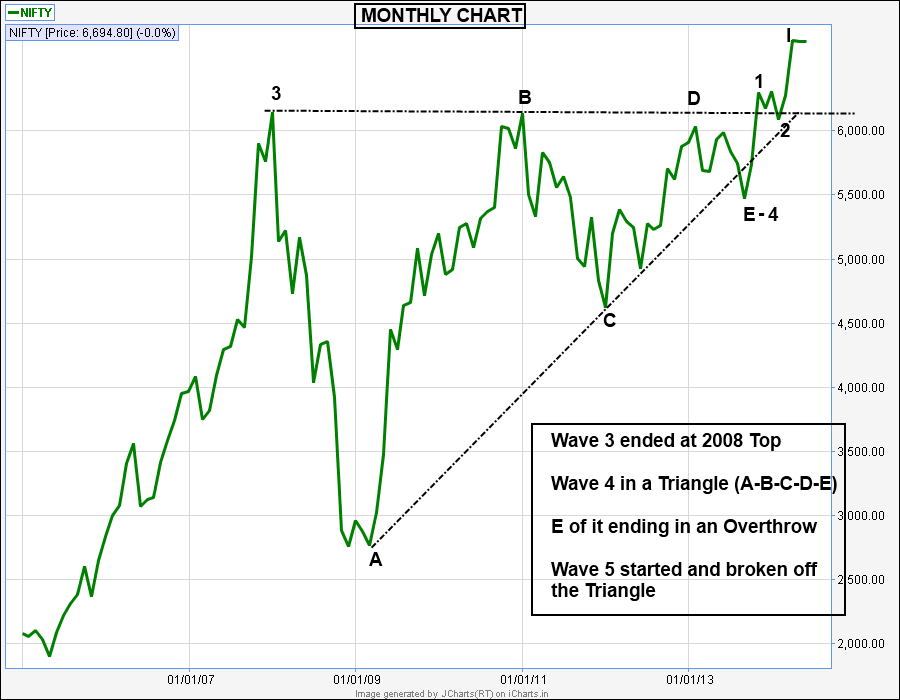 If the Triangle Pattern holds with the Results and achieve it's true targets, the Long Term is quite Bullish.
Invalidation may be taken as close below the Top Trendline ( apprx 6350 level) 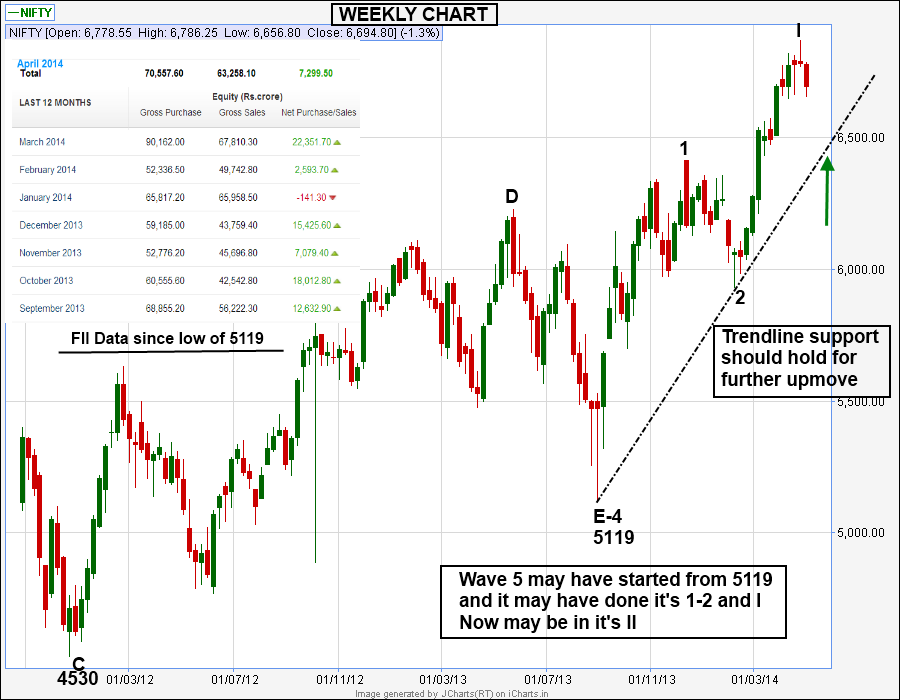 The Trendline support is important for continuing the Upmove further. FII have been on the Buy side that too with good volumes since the low of 5119 was made. It's in line with the overall Trend as of now. 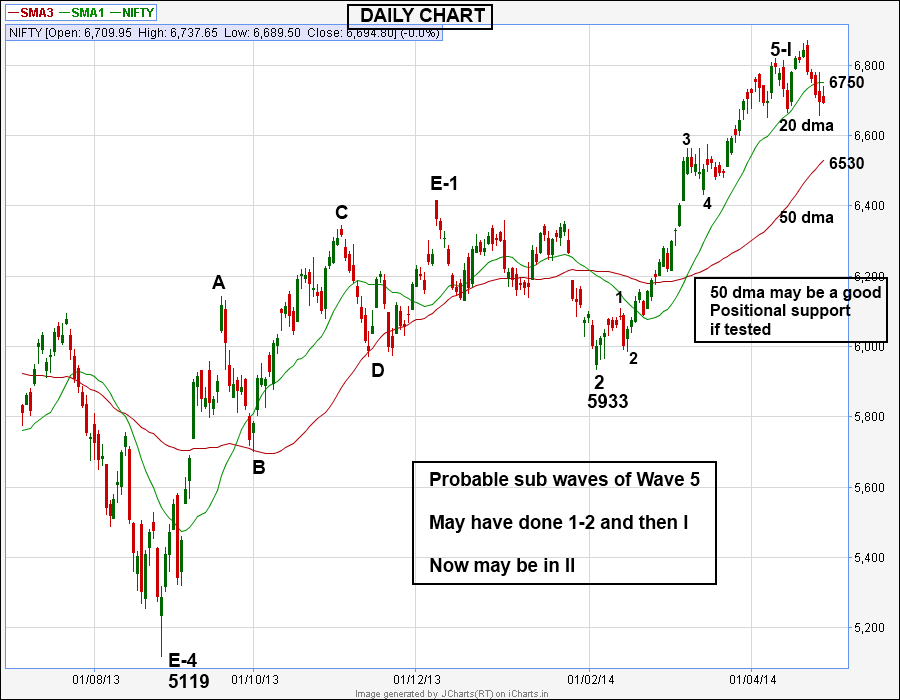 A correction may have started from the recent high in the Daily TF. 50dma, if tested, should hold for Positional Upmove further. Close below 6500 would make the Bias a suspect. 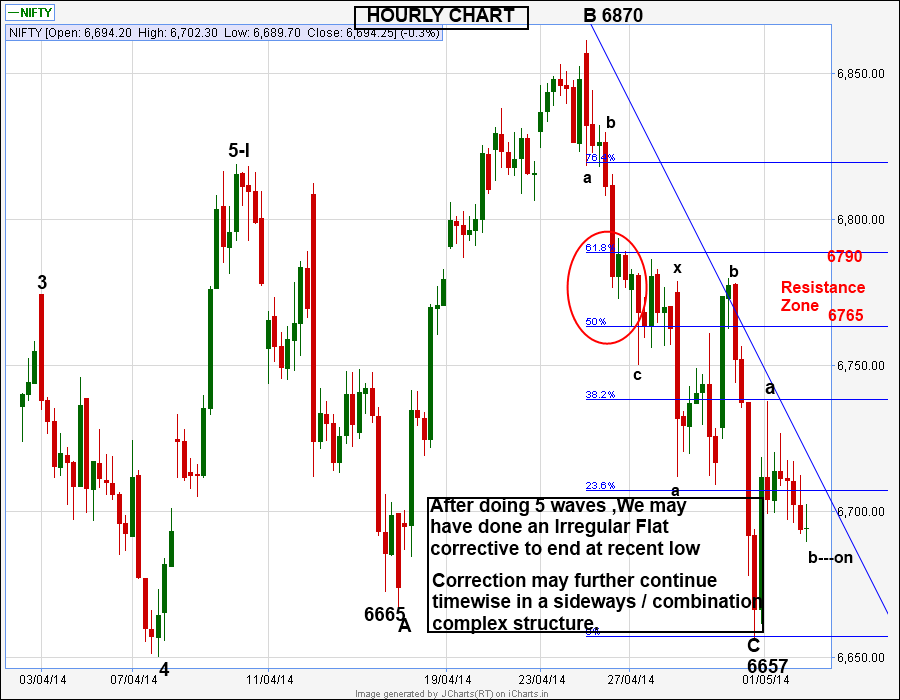 The Correction may continue for this week also with a likely resistance zone between 6765 and 6790 . Low of 6650 apprx may be retested and can go further below also.

The 500 point range between 6500-7000 has been set with almost equal Open Interest in 6500 PE and 7000 CE.
The Volatility and hence the Premium for Options are on the higher side in anticipation of a big move. As of now this favours the Writers.

But the Election Result Day can be a 'Black Swan' Event. Though the uniform prediction is of likely formation of 'The Modi Sarkar', we should also take unlikely results in to our Trading Strategy to lower the risk . Now few probabilities that can happen on 16th May are -

1. BJP gets 225+ and NDA apprx 272 or above seats to form a stable Govt as predicted generally. In this case though the Price move will be positive, we are likely to see least movement compared to other scenarios.

2. BJP gets to 180-200, NDA gets near 225+ seats. Though Positive but somewhat below general expectations. Indication of weak Govt to form and lots of horse trading for critical 50 + seats.

3. A Positive Surprise of BJP by itself getting to Majority mark of 272 seats.
( No single Party has got the majority since 1984 elections crowning Rajiv Gandhi ).
It Will open the gates for a very stable Govt and give a booster shot to the sentiments.

4. A Black Swan Event with negativity - BJP is held below 180 seat mark and not to form the Govt. A Third Front let Govt in sight and Market will go into a tail spin.

Expect minimum a Circuit down, even couple of them on the same day and a likely target below 4500 to come soon.

This Bearish Probability to Unfold in the above case- 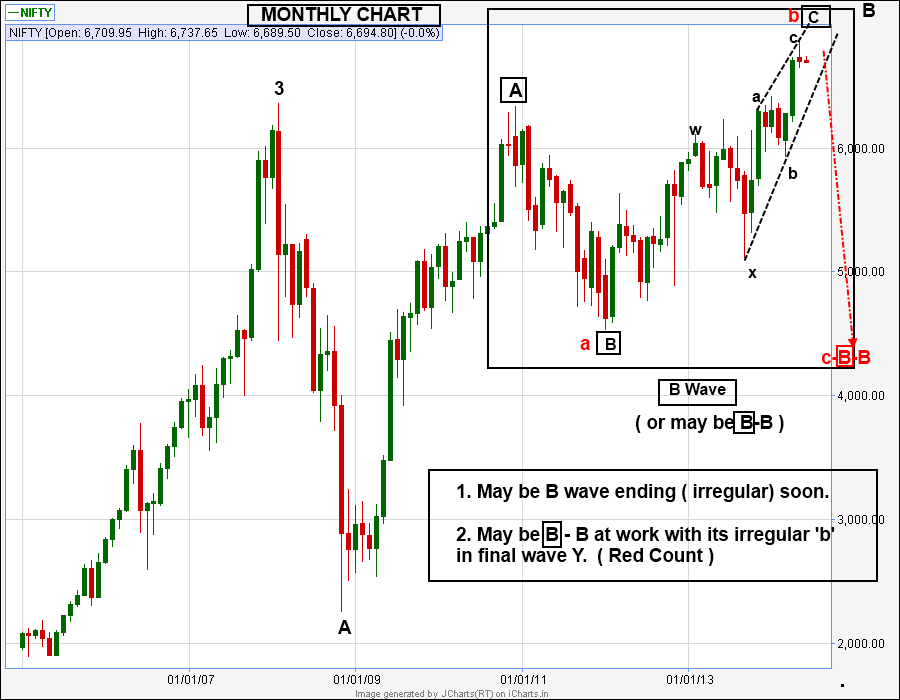 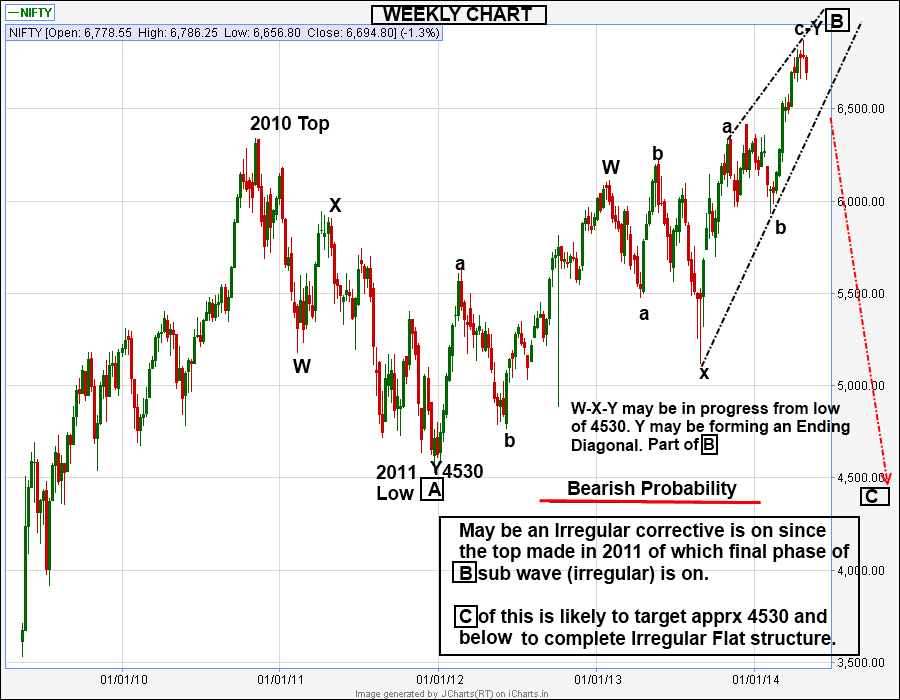 Trading is a game of Probabilities. Now a prudent Technical Trader will keep all these probabilities in mind to make a smart Trading Plan. A likely 'Hedged Position with proper Position size' may reap Profits in any of the scenario unfolding. Hence -

Wow Sir, what an analysis, really enjoyed it.

Always nice to hear from you.

The post updated right at turn of the market when was reqd at last weekend.( Else last post stands valid where we discussed a probable 7200+ as target.)

"Low of 6650 apprx may be retested and can go further below also."
It did that and made a low of 6638
from where it has moved up fast.

Ya BJP got the majority on it's own. Markets moved to Target as in case 1 to 7200+ without a circuit.

Positionally, in Medium term time frame I expect 9000 apprx if 6650 is not taken out on closing basis (as of now).

Will update more after seeing this week's/month's trading.

india has a lot of catch up to do with the kind of china growth....its india's decade....retail participation is yet to commence...the missing ingriedient of stable and decisive government is in sight now....so buy on dips and retire rich....watch the international events for trading oppurtunities.... or rather buying oppurtunities......