Time to be Cautious and Flexible 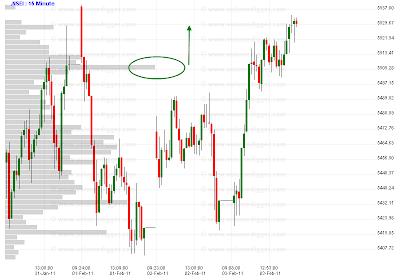 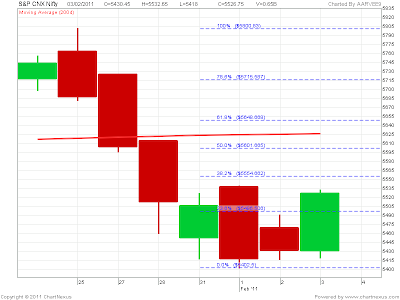 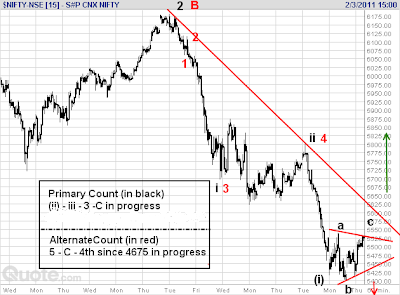 1. As expected yesterday ,above the midpoint of 5460, Nifty touched the upper range at 5520 levels.

2. Interesting was the close of the day ,above 5500 levels and  5dema, and near day's high. There is a negative diversion in 5min and hourly Indicators.

6. One Important observation is that ,it has been seen in last couple of years that option analysis may predict the movement of the smart money and hence the likely direction of trade .During such times of sideways movement generally the Put addition provides a good support at the strike level , also O.I. reaching near 1 cr. apprx. empahsizes the same (that too in the first week of the month).This pattern has happened repeatedly during turns of the market after significant correction .Now it's showing up in 5400 strike Puts after today's trade (93lac+) . (Alternatively the break of 5400 level will give flash 200-300 points ) .

7. This observation also brings to the drawing board the alternate EW count . The Primary count is shown in the charts but now the alternate count of  5 - C -4th since 4675 should also be taken into account .Last 4 days of trading is in the triangle pattern and can be an ending diagonal ,before the 5th starts.

When in doubt ,stay out ,calculate the probabilities ,let market show its hand ,then enter with low risk and clear direction.Time to be cautious ,unbiased and flexible.

good analysis rv. to the best of my knowledge the 5 wave traingle shud be a diagonal triangle
rather than symmetrical.

PS,
Ya u r correct ,where triangle is generally taken as a corrective pattern ,diagonals(ending or leading )are contracting or expanding in nature which can be both upwards as well as downwards.
here i am trying to show a triangle pattern developing(corrective) which may end as a diagonal when its abcde gets completed (then we redraw the lines).It may not also.but then these are the probabilities only.

rv
u have done oi analysis for some time now.
have u seen a supt with close to i cr oi
like 5400 now break?

may be not ,not aleast in last year ,since 2009 index options are segmentwise largest trading at NSE.(ahead of index future ,stock futures and stock options,hence can show the probabale direction.
But patterns are made to be broken ,the thing which becomes most certain on repeated occurence,tends to give way.As other indicators its only a probability .It also has another factor in combination ,the less than 1.0 Put / call ratio.I think this accumulation is there for the first time with this p/c ratio.(not sure though).