Will the Charts show the Direction ahead ?

1. The Moving Averages chart shows a resistance of 20 dema level ,It has not been crossed since first week of Jan. Keep an eye on the Price action here.Keep in mind the Bearish alignment of the averages and trading below 200dma. 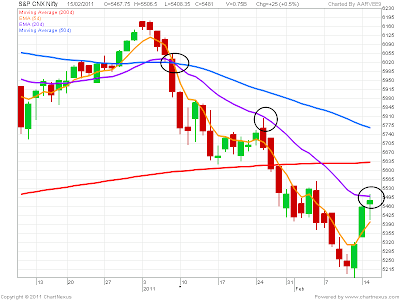 2. The Medium term Trendline was broken earlier , Will this be a classic retest of the Trendline and downward journey again ? or Was this Breakdown a false one ? Check it out in coming days. 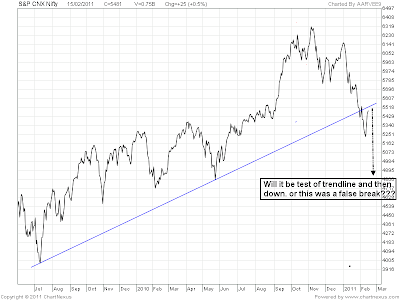 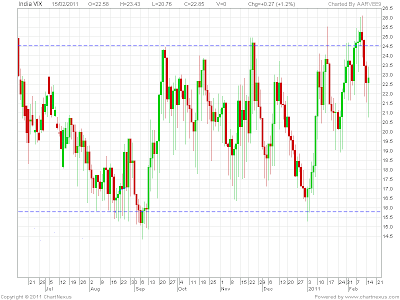 4. The Weekly chart is showing the 'Kiss & Tell' story of 13w and 34w moving averages.They had a bullish cross in May'09 and since then have never been so close.Which way will they part after kissing ,Up(Fast rise) or Down(Bearish cross)? 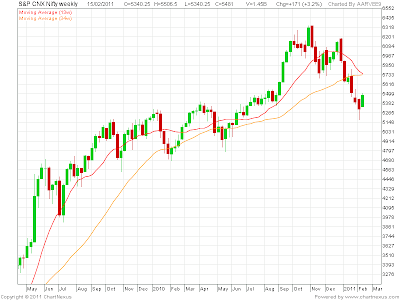 I am not a believer of the gap theories.May be u can share something interesting.

Even I don't know much about gaps. They say that if at any gap some major players are trapped they would like to play it contra to get to their price to liquidate the position. Therefore, gaps are relevant. May be Mynac might throw some light what happened at those price zones!

Dear Rajib,
Dear AAR VEE,Ilango,mok and many of us are aware of "my Technical Knowledge" which is zero..
Already there is a huge gap between me and Market due to term "technical analysis" though in real life I am related to civil engineering & you are talking about "that" gap.Joke apart but I just try to understand market with the help of you people & volume addition-deletion i.e. O.I.

In spite of rally the main trend is yet down.After today's indecisive close when just 7 trading days are left for expiry & Budget is there,the huge 5500 PE & CE writing looks abnormal for me when Nifty is technically getting or likely to get weak from here onwards from traders point of view.
The huge 2.55 NF O.I. & 1 CR plus O.I. built up in 5400 PE,no rollover even around 5200 in next series when it bounced back from 5175 to 5500 are raising question mark.Is it long Built up in 54 & 5500 PE?
If Nifty shall close above 5540 on Thursday then only the probability of any short covering is there otherwise the prominent roll over for this series which was mainly bet.5620 & 5850,which are yet far far away from current level in spite of replacement of old Bulls by new ones.So the short covering is not there.
So is it false breakout above that channel?We shall try to find out an answer on Thursday onwards.

What an appropriate picture you have chosen! Great.....

I can't find out it properly but is he going to select left one? Does he want to left the right one?because his left hand is slightly up right while holding... :))D

Let us find out in coming days.

Dear RV,doing great work.
@ Rajib & Mynac.
in my view nf stays here for few days in the range 5525-5385,& near to expiry fall again towards 5300 level.
No wevery body thinking of a break out & goes for buying in the market,retail also start Put writing,so to create panic I think 1 fall still remains till expiry,

Dear mynac,
Thanks for the O.I. interpretation.may be in anticipation of budget movement ,smart money is writing both puts and calls at 5500 strike.

We read the picture /data as per our bias ,that's the folly of the human nature which traps us :))

Thanks for sharing ur views.

I think in such sideways correction ,we should watch the levels analyzed by our methods,see the price action there,let market show its hand ,then enter trade :)

I remember a gap in May 09 ,election result day when will it be filled ?:)

The May 09 gap would perhaps fit as a runaway gap that may not get filled easily. In fact this is one of the reasons for the bulls to be happy in LT structure.. This kind of gap-opening made the initial wave, whatever you call it A or 1 from March 09 so strong that the subsequent correction could hardly make a dent in price. It perhaps did what it could by consuming a long time.. The failure of B to correct much of this A should mean that there is enough left in C either in price or in time or both!!

Do let me know your views on the above

On CE/PE writing, it seems to be assumed that it is the smart money which "writes" and the retail "buys". So if calls are written at say 5500 that would mean that smart money is confident of staying below that level by expiry? am I right?

However one doubt I have is that isn't most F&O activity arbitrage driven? If so, shouldn't F&O activity merely follow cash price rather than act as an independent signal to the cash price?

@KRG,
Seriously i dont give so much importance to gaps to wonder in voids and analyze.what u say may be correct that perhaps C will do the needful.

On issue of options-
1. One must take into consideration the primary set up of the market i.e. the auction process.for creating demand and supply one needs market makers.They will tend to sell to create the market ,retailers may be on the buy side .also the writing requires margins hence the deep pockets and smart money.
2. Take a look at the turnover in subheads ,the options turnover is greater than cash or futures or the combimed of the two.hence only the hedge trades are not being done.
3.The percentage profit one gets in options is quite large for holding on a relatively small holding period.One who has deliveries can manipulate the auction process for a shorter time period to gain by the time value aspect.
4.Major portion of the option trade may be done for hedging purpose or for arbitrage but speculative aspect cannot be ruled out.
5. I had written in detail on this aspect at JN as to why options alone cannot indicate price movement.they should be combined with other aspects to judge the same.I will repost the comment seperately here.

5500 level as almost equal o.i. and addition last day in both calls and puts as mentioned in the last post.It cannot be taken as expiry level now but can only be treated as conflict level.It may be that some players have hedged for a big movement before budget in this expiry by simultaneously writing both puts and calls at 5500 level.

1.Open Interest and Option analysis to me are secondary indicators of market and they should be treated like one.

2.O.I. and change of it cannot be looked in isolation.It has to be used in conjunction of Nifty price movement, data from rollover date and change in it hence.as well as overall market picture.It can only help in strengthening our conviction rather than forming/basing ones conviction on it.

3.Just to give an example –
a.in current month of March on 12/03 (Friday),there was huge build up of 10.57 and 12.34 lac shares in respective O.I. of 5100 CE and 5200CE, Nifty was trading in a tight range of 5095-5150 throughout the week.If we read this data wrt Nifty price ,we will be sure that calls have been written and the range of nifty will breakdown as all other indicators are OB.but exact opposite happened and these calls got covered in next two trading sessions.why? because someone smart knew of range break coming and was hedging his position for breakdown and must have gone long in nifty futures ,when the range broke on upside he covered the calls and sold of futures.so the above data only indicated of coming range break but not the direction.

b.similarly on 8/3,(as I mentioned in my report also), 5200PE have added unusual open interest of 10lac shares nifty was in the same range as above,this definitely showed downside market capped at 5080 because hedging done should have been done in above manner and moreover it was way above strike,someone must have been interested in taking the premium and rangebound market would have given him time decay and breakout of the range ,a handsome profit.
so this doesn’t makes sense in isolation.

4.Higher O.I in puts have been considered as base building and strong support but in Oct..last year the puts were heavily written as markets was expected to go to 5300, they were massacered till no end as market tanked to 4500.All the bases formed by put writing were bombed
The very next month market expected to go to 4200 or remain range bound covered all grounds and ended above 5100 doing the same to call writers.
Though I consider the writers, the most smart and informed of the traders with deep pockets ,they also are drummed and clearly all direction and range based on their data gets busted that time.

5.The data of O.I. has no clear breakup of buying and selling ,we never know the net open positions bias ,it could be both ways.secondly we don’t have figures of hedging ,which may be done with futures or amongst the options itself.lastly some insiders /informed traders take heavy naked positions/partly hedged,we will never know which positions are hedged and how and which are naked and with what bias.

This makes the O.I. data and change of it very dicey to interpret.

6.This month the data looked clear because of strong bias at the start in 5000puts(over one crore),secondly heavy build up in 5100calls simultaneously.the range at the start of month is never so small,once it breaked and then again traded sideways without major correction,also the volatility in options was dead this month,gave some clear indications. Normally it is not always so,and we get caught up on wrong foot analyzing this data in isolation.

7 My way of going about O.I. data
- I look upon this data as secondary indicator

- I look for some unusual build up and try to see its followup and interpret it in conjunction with market conditions prevailing that time.

-for me options are tools for hedging more than direction indicators,(which they may sometime when other datas are confusing)

-I find that upto 15th of a month O.I data may determine a range in a trending market as writing is rampant due to higher premiums.I check this data after 15th and see if any trade can be formulized based on it.

-I take some trade based on my convictions(hedging them too) in a week before expiry as options can give fabulous returns compared to other instruments with similar investment capital.

-last week of expiry is dangerous as premiums disappear in a day and don’t give a second chance to cover as in previous weeks,so losses in terms of percentage can be huge or total.

8.There are no rules formalized for interpretation of O.I. data (which itself is not transparent) as with other indicators because maybe it is not a indicator at all which gives uniform signals under same conditions all the timeTthis is because of its non transparent and dynamic nature which changes real fast in real time.

9.So because of the above considerations I feel this may be difficult to quantify and then interpret the data,secondly it may do more harm to traders not well acquainted with option data because.the data cannot speak for itself as it does in case of other indicators.

@PS,
nice post .what is the probable time analysis for this scenario for filling the gap.

wonder in voids? not too sure there..
FWIW, for me also, price is the first indicator and all others secondary. Hence my interest in EW as it is largely based on price structure..

On options: Agreed that leverage & speculation definitely occupies volumes in F&O. However I do feel that majority F&O volume is hedge & programmed in nature. As an e.g., large o/s OTC bond issues structured on equity movements require the issuers (and their guarantors viz.,investment bankers) to constantly do delta hedging