This is in continuation with the preferable EW count I have been following successfully since the upmove began from 5350.PLease check the last week's EW count Post -
http://o-j-n.blogspot.com/2010/10/ew-count.html

As per this count the 5th wave of the immediate upmove has ended in the start of the month at 6225 level. Since then we are in A-B-C correction of the upmove.This correction has taken an expanded triangle pattern,as mentioned in the weekender yesterday -
http://o-j-n.blogspot.com/2010/10/weekend-analysis_24.html , and seems to be a flat one with probable 3-3-5 wave count. The 'A' ,and today the 'B' part seems to be over and now the 'C' can unfold in the 5 wave form ,with this correction ending in the 5750-5900 zone.( we know of two imp. support areas down as 5820 and 5935 mentioned yesterday). 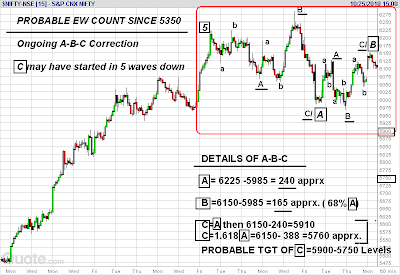 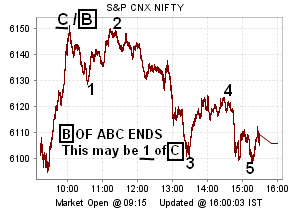 If i am a bit early in calling the start of the 'C' down then the Point of Invalidation of this count will be the crossing of today's high .i.e. 6151 level, since this is the start of the first wave of 'C' and cannot be crossed up now as per the EW hard rule. If invalidates this count than the targets for 'B' up are mentioned in last week's link given above. 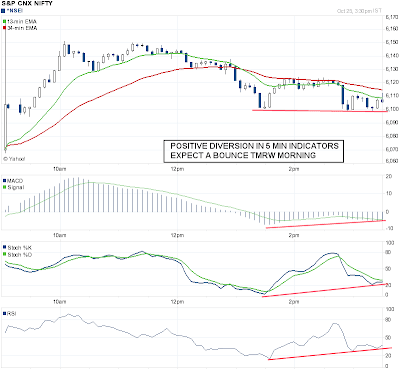 As per the above chart tomorrow morning may see a bounce up ,which may be wave 2 up of the 'C' down. This should end below 6151 .(Also as per Volume profile today 6145 is the selling area ,hence a resistance for tmrw's trading.)

Have changed the color of the post background as my, oh!!so black & white charts, gets lost in the white backdrop.

PL. bear with me.

mok,
ya it can turn out to be a good risk -reward trade if fits well .since the s/l will be very near the bounce area may be 10-20 points .take it but keep the hard s/l .
dont take any out of money options as may end quite range bound till expiry.

Pl. download GCI-MT4 free software and u can see all the TF -5,15,30,hr,4hr,day,week,month Live but only for NF.U can set the above parameters and more.

If u remember AZ brought this to our notice and has a post on OJN-1 for its download.

RV,
Sujatha
if both of you see the color background i have set NOW for Posts,
it would be nice.

i will tune it as i get the feedback,
thanks.

RV, since u r online, please check and confirm.

mok,
preferable was previous setting ,have no problems with the alternative.let the lady take the call

Yeah, not much choices either at the adjustments section.
We will try more into it when we have time.

She could not read certain letters like the comments etc.
May be it was too merged up - the background and letters colors.

Lets see. Thanks RV.
Earlier in the ojn1 manu asked for some changes since he could not read on the mobile screen.

RV,
you make waves :) for me it is EastWest.
I will simply take your analysis.

Ok, i came across this other chart I am mailing you.
Guess it is Wolf or Harmony or Gartlely. If you are able to make use of it.

I have few opinions to your observations!

3. The above pattern will also indicate that we are in (B) wave from the end of 2008 and not in a fresh 5-wave journey!

4. In many of the front-line stocks (Cements, Sugar, Pharma) I see quite bullishness!

Keep up the good work.Its all refreshing to view unbaised views for Nifty on this site.Kudos to all who put in their efforts to paint the correct picture of markets.I follow the EW count on this site feverently so keep posting those counts.Thanks and Regards

1.We should keep in mind that this A-B-C correction is only of the immediate upmove since 5350,If we take a longer view it will be the 4th wave of upmove since 4786.u will see it fitting the wave structure well.

Hope u get my perspective in different time frames.I welcome u to share ur views and charts in a guest post.It will be helpful for all.

Thanks for the comments.
U are free to share ur views and observations too for the benefit of all.

None could have put the picture better than what you have done in your post.

My thoughts are the same. It is the clarity of your thought sequence and articulation which is indeed remarkable.

Wish I could imitate you.

ojn_2 AT yahoo.in - Please send it this email Mok will post the chart with your name.

GM MOK,
ema image is been emailed for post..