Yet another mail came now from a friend saying that astrologically something is drastically going to be wrong starting from today as per some western astrologer ,similar bearish views of different kinds and theories are pouring in the mailbox.I myself have a short term and medium term Bearish view but all this bearish hammering has made me alert and review what can be Bullish and set the Point of Invalidation of Bearish view.


What catches the eyes is the FII activity since start of 2010. 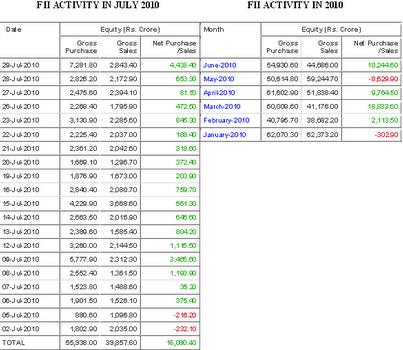 The data is courtesy "Moneycontrol.com"
FII's have been relentless net buyers in 2010.Liquidty is above all indicators ,technical or fundamental, to drive the price ,FII buying shows their conviction that prices will rise.


I am reposting a chart (showing two inverted head & shoulders patterns) which i have mailed at our group sometime in July,showing Bullish possibilities in medium term. 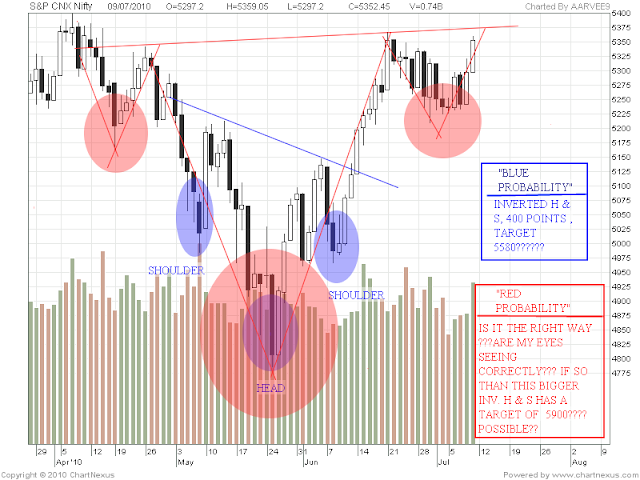 The Point of Iinvalidation for medium term Bearish view will come if this shortterm correction ends and prices trade above the 23.6% & 38.2%  Fibo. retrace of this upmove (relevant chart with Weekend Analysis ) ,showing strenght and close above the 5475 levels .This level has been stressed in my previous posts too.

So, be vigilant at imp. price levels and give preference to Prices above Indicators.
Posted by AAR VEE at 10:12 PM

RV,
1. western astrologers are right as their views are based on heliocentric positions from the angle of west whereas we are in the east.
2. mercury is setting in the west and rising in the east, "Yen" should play a major role in hangseng ...

I leave it here for an logical guess

thanks RV, another good one from you,
the HnS also goes with the extensions of Fibo, and the wave tops. It may come after a small dip as a HigherHigh and a NewerHigh that Nifty keeps making from 2009

another note:
In chartnexus, you will get one small arrow on the rightside near scroll bar. Using that you can make space at the top of the chart, where you can project the levels of HnS brk or extn, or any such projections.

always good to have contrary view/plan and levels ready in hand to tackle unexpected moves..

i have read this pattern earlier as cup and handle and later i discarded that opinion as the handle formation should lack volumes whereas we had seen better volumes in that region..now, interesting to know that inv.H&S..

its not about astrology but the hammering that is being built up .my instincts tells me to be alert.i myself have given the footnote on the "future shock" post about western astrologer and having that article since a month or so .I am bearish but things tells me to be alert so that i dont become a bunny in a headlight for easy shooting ,when the prices turn on their heels.

btw this is the gist of that article ( i think sujatha mentioned the same at ojn1 and manojag sent a fwd. of his friends mail)-

"On August 1, give or take a week, we’ll have the most five-planet alignments in perhaps thousands of years. Known as the “Cardinal Climax,” this is the meanest, nastiest, most challenging and most transformational of any planetary phenomena in all of written history!"

//this is the meanest, nastiest, most challenging and most transformational of any planetary phenomena in all of written history!//

enough to shake up the weak hearts ..lol

ur HNS post is indeed(if supported by price) looks amazing..

PS: FII fig. must be seen at """http://www.sebi.gov.in/Index.jsp?contentDisp=Database"""then latest