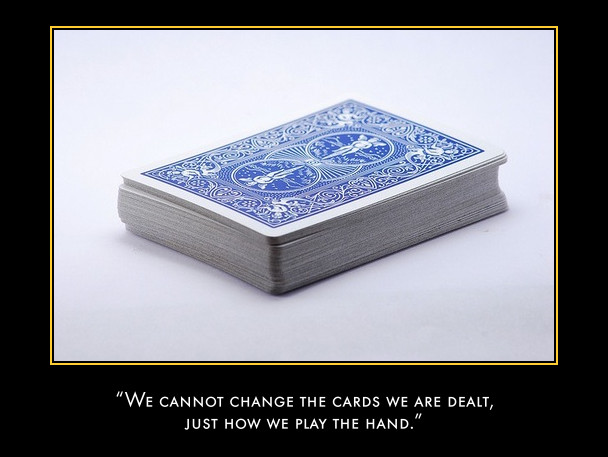 Last Weekend Post had these lines as opening statements -
"Nifty is at an important juncture of trading which may decide the short term as well as medium term trend in this week or two. It seems to be coming out of consolidation, now whether it is sustainable or will give a false breakout to sink later is to be seen. "

and this as closing one -
"Bias is towards long now but cautious trading required to avoid getting trapped as indicated. "

Since the initial Analysis was Bullish last weekend but the above statements were at the hindsight due to various Resistances ahead and expectation of reversal , so the update on Monday eod suggested to keep a SAR of 5635 which came into play right the next day and obliged the whole week further .

Hence always remember the Quote above - " We cannot change the cards we are dealt ,
Just how we play the hand " . It emphasizes preparation , awarness and flexibility that will only help lock in profits and survival in these dynamic markets .

The Technical structure of Nifty has been altered or say reversed compared to last weekend. Now for the analysis of indicators as of today for further trading probabilities-

The Weekly and Daily charts show a downward bias with indicators and both trading below the mid B.B. ,though the Daily chart is near the lower B.B. and approaching the oversold region still it may remain so due to higher TF of Weekly giving a sell.
Only a strong rally may alter the Weekly chart but then may give a firm negative diversion later this week. Apprx . 5600 level remains a important Resistance as both the charts have mid B.B. near this mark. 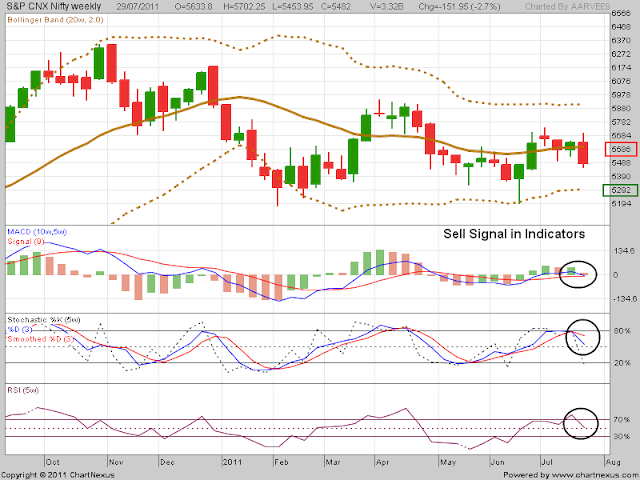 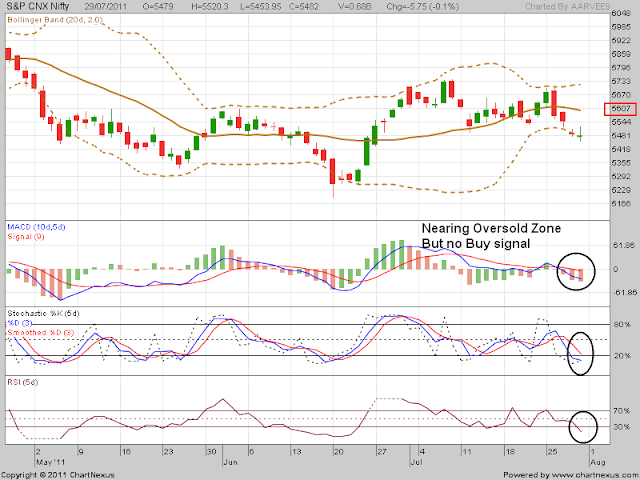 The Rising Wedge in the Daily charts broke down conclusively last week after getting resisted at the Triangle Top trendline which is acting as a strong Resistance since last few months. This Week the Triangle trendline resistance will be at 5600-5650 levels.
The Target of the Wedge may be apprx. 5200 level from where it started. 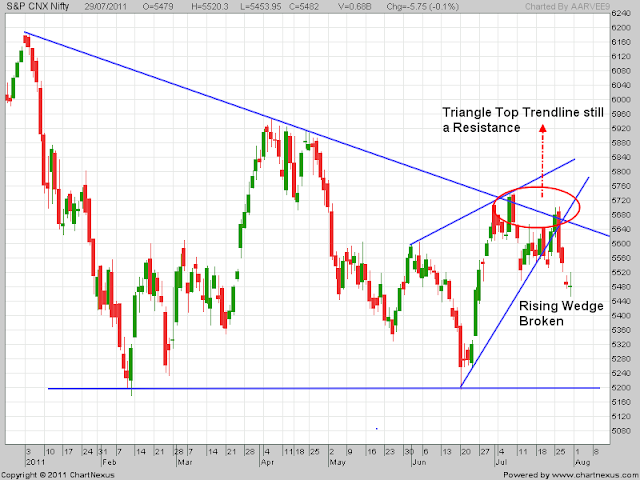 In the Weekly chart ,The prices are approaching the important Trendline near 5400 levels which has supported the Trend since late 2009 and has never been broken on closing basis. Looks like the prices are in the final stage of the squeeze on Weekly charts. 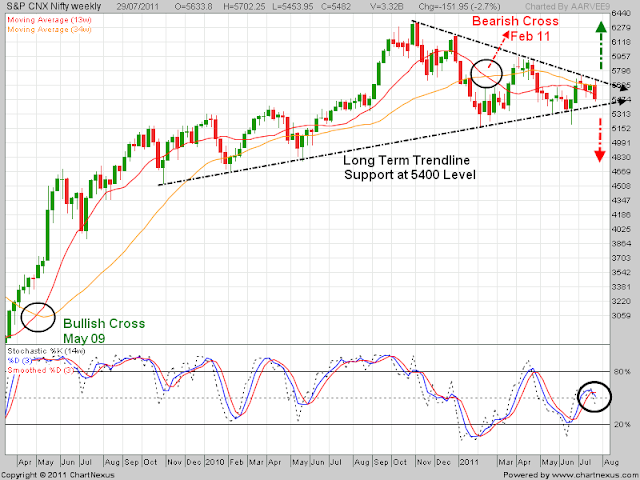 The Short term averages of 5-20dema have given a Bearish cross after seeming to give a fast rise last week . Trading is now below 50 dma ,which now will act as a Resistance and may be tested for whipsaws. 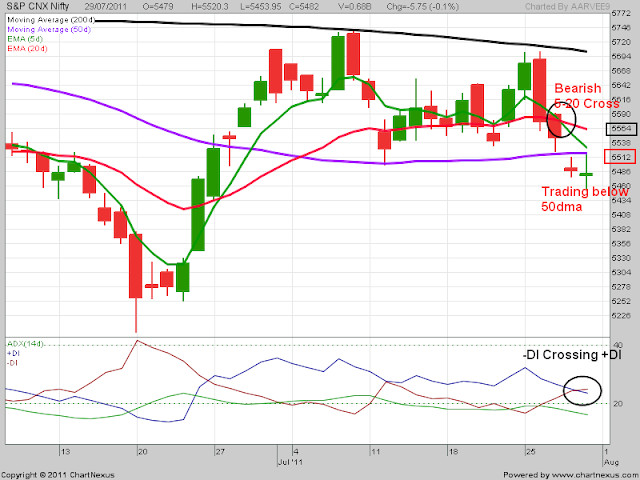 The Weekly ema chart along with the Pivot points broadly shows that below 5450 zone is Downward bias , near 5550 is Neutral and above 5650 only is the Upward bias. 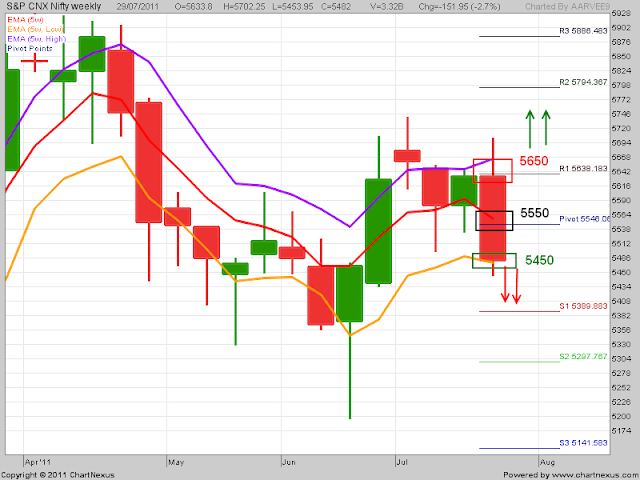 Its early days in the August series , the Open Interest build up suggests hedging of both longs and shorts by options , due to the direction uncertainity caused by US debt default issue and likely solution on Aug. 2nd. Broad range is 5400-5700 and a likely Resistance near  5600 level in case of an upmove. Break of 5400 may give a quick 5200 due to unwinding of positions as 5400 looks more of a hedged level than actual Support going by the data. 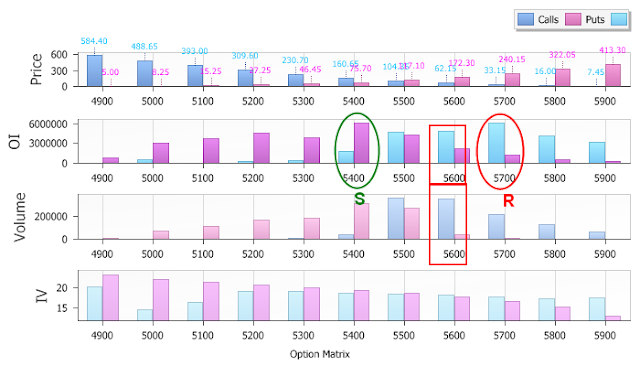 We may basically retrace the 5700-5450 downtrend of last week (4days trading) in Hourly time frame initially this week. The quality of the bounce( faster retrace/not ) and holding of levels (5550-80 ) will indicate further trading of higher TF.

" Now if breaks 5550 and then 50dma will be quite Bearish , changing the Counts and marking start of larger C somewhere at 5740 . Not giving it much importance till TA indicates so."

But this scenario is in place and TA indications also match , now we take this as the Preferred short term probability and the count that we have been following as an  Alternate . 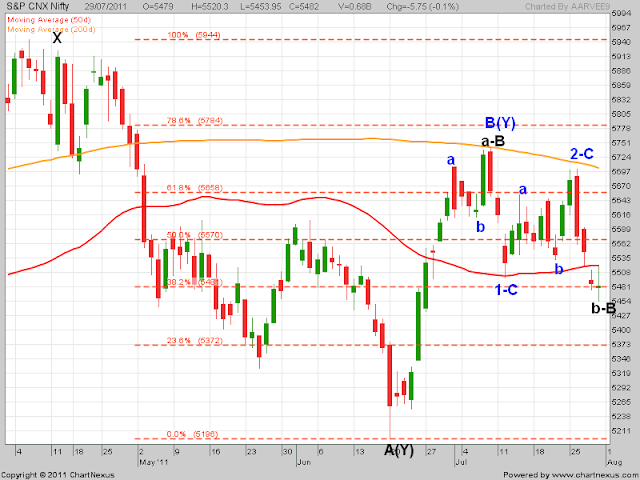 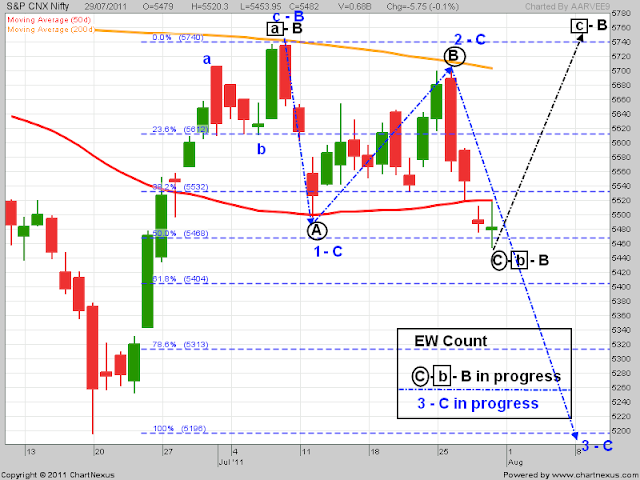 - Bias is down with probability of an initial upmove if 5450 is held. 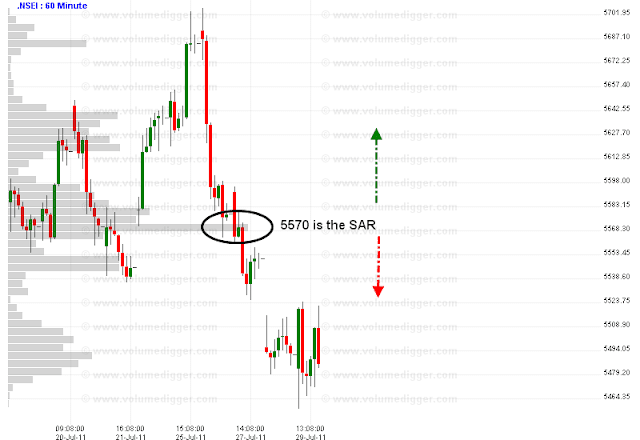 Have A Profitable Week Ahead !!!

After viewing ur work i have to say one line only "Waah kya baat hai". Really very good analysis & showing very clearly all possibilities. keep it up sir & take care of you.

good one rv.just had a question if possible for u to answer, when u label is it just by look or u take help of indicators. like i have heard of divergence in 5th but i have seen lot of times it appearing in 3rd itself.

Let me have the benefit of grounds below my feet lest i am blown away by your praises and nice words :))

Thanks for keeping me grounded :))

EW cannot be a good idea stand alone for short term trading. While labelling I try to follow few points-

1. Higher TF counts and their probable targets.
2. Indicators as MACD skewed for EW (brought in knowledge by Dear Jazz)
3. Structure of the wave in totality.
4. Points of invalidation of the count.
5. Corelation with my TA study overall.
6. Alternate count and its probable indicators for validation.
Etc.

EW is used by me to predict and trade a direction for short term in line with larger trend,as its a method that provides advance probable targets.
Moreover it helps in the neglected area of Money Management,where to deploy all and where trade light.

I will send u few good articles and links which are helpful for such insight.

I always like RV's way of presentation so i can not stop myself to appreciate his work.

As Doctors use so many methods to diagnose the patients like MRI, CT-scan, X-rays, Blood tests, pulse etc. etc., just like that u wisely use all tools to catch the trend. Thats why ur weekly presentation is most popular in trading community and for all this u deserve big applause:)

Hi Kumarji ,
GM
Thanks for the ever flowing praises.
Anyday I would like to change places with u :))

waiting for ur articles. one more request. how u use macd to confirm counts can u explain. whenever u have sometime in hand if u cud explain with 1-2 by mail, alternatively u can make it a reference post so all can benefit frm it.

kumarji,
very true. it has been almost 15-18 months since i started reading rv's analysis frm his mails to ilango sir who put it up to here today.
there has been a great progress in his analysis and views. on reading him one can easily get to know that he is very intelligent, knowledgeable, hard working and blessed with excellent presentation skills .all rolled in one

As usual u have a niche of presenting the charts to there optimum level and making them clear and understandable to all.
Thanks and keep guiding