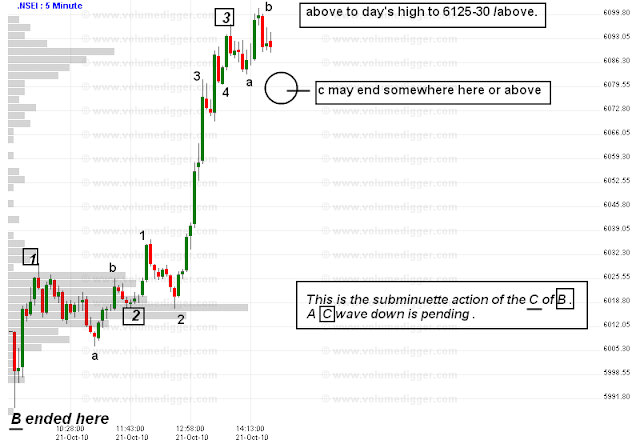 Thanks AarVee,
For gr8 and and simple wave counts.This blog is really helpful.

Just trying hand at EW lately.U may visit sujatha's post for intraday levels today with discussion on EW counts in the comment section.Do let us know ur observations regularly as u are an old EW follower.

Thanks for the chart. Is there a view that c has completed and a gap up tomorrow?

As pointed in the chart ,one final upmove,5th of this wave started today is left ,may be the cof 4th ended in a flat correction.As per vol. profiles and pivots it may be 6130-6185 level.

as per EW theory ,in an expanded flat correction,the C of B will end above the start of A of B ,that is above 6125 level.(in this case of A-B-C correction)

Pl. see the weekend chart of ew also for the preferred count.

I have posted detailed charts in one of my posts last month pl. check.