How to Trade the Next Week ??

1. The Week was rangebound throughout on both sides of the SAR 5480 , as indicated in the  detailed Weekend analysis below.

2. The broader Range suggested of 5400-5600 couldn't be resolved this Week.
As analyzed in the Mid week Review ,The markets couldn't trade above 5525 levels to show strength and gave some gains below 5500/5480 in later half of the Week. 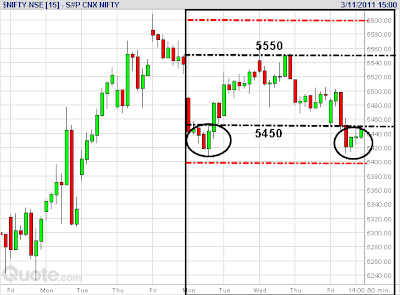 3. Is the Market showing resilience amidst all the bad news? Even the Tsunami today couldn't take the Market down below 5400 . Local Political Instability(DMK), Libya , Mideast crisis, Oil Prices, Scams, Inflation etc have been digested this Week. What is the Market signal by this Price response to the News this Week??

4. Is it a distribution going on at higher levels above 5400 ? and may be a start of a sucker 'B' wave rally up to further this cause and Financial year end NAV adjustments of the fund managers.

5. The bigger picture should be remembered in this chaos- The Larger TF trend is Down .One should be very cautious at these levels and play big only when the Trend in trading TF is in alignment with the immediate TF above, else the contra trades should be light and booked quickly.

6. Is the Market ready to climb 'The Wall of Worry' or resume the 'Big slide' in the second half of this series??

Hope to find some answers or indicators to coming answers in the next Week.

A Triangle Pattern seems to be developing out of the trading this Week. Keep an eye on break of it on either side. The SAR and targets remain the same as Posted in Update and Weekend analysis below. Trade light ,as suggested earlier too, in this choppy market (May not resolve tomorrow too,but be vigilant) 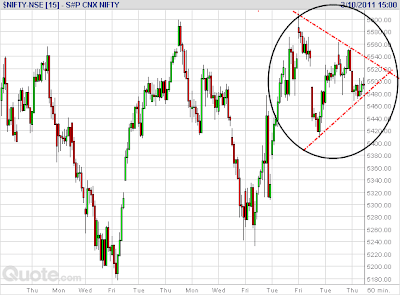 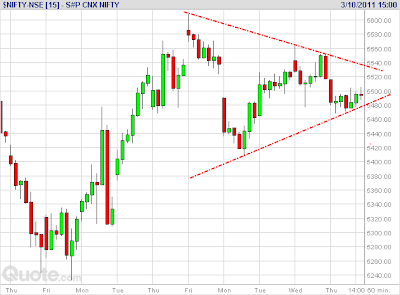 1. Markets this Week has been Choppy and Sideways till now.

3. FII's have been net Buyers this week.

4. Option data structure is same as on Weekend with bias for some upside increasing.

6. Volume Profile for last three days shows strength above 5525 and weakness below 5500 level. 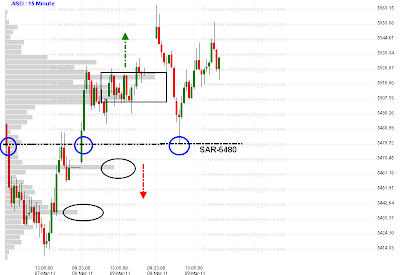 7. A Pattern of Ascending Triangle may be developing in Hourly charts. Break of Trendline is near 5500 levels and strength above 5560 level. 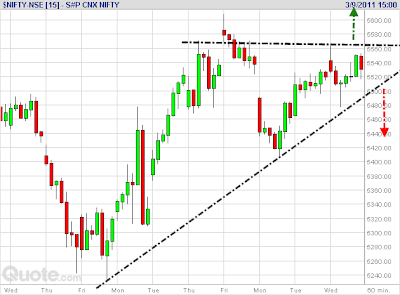 8. Prices are above 5 and 20 ema and both are Bullishly aligned.

10. One should Trade light and nimble this remaining Week.

WEEKEND ANALYSIS :( 06-03-11 )
This Week's trading has its importance for the Trend confirmation. After weeks of firm downtrend , prices have closed above the 5wema mark. Now is this just a short term reversal and the downtrend will resume course or is it the start of a new uptrend? such questions may be answered in this Week's trading.

Both the Daily and Weekly Indicators are in uptrend and yet to exhaust, indicating the probability of some upmove this Week. Prices are trading near the upper Bollinger Band in the Daily chart ,whereas they have just started moving up from the lower Band in the Weekly ,and have the potential to touch the middle band near 5800 level in a week or two in this uptrend. 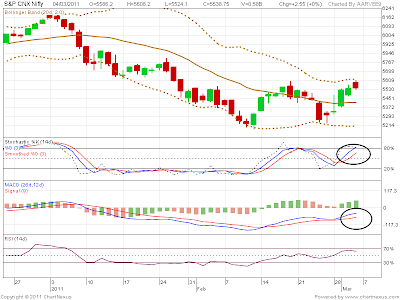 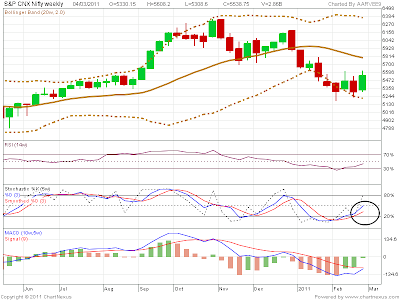 The 10day Volume profile shows 5480 as the Highest Volume Node which may act as a Pivot for this Week's trading . Closing below 5440 level may give a quick 100-150 points on the lower side for the prices to fill the low volume area. 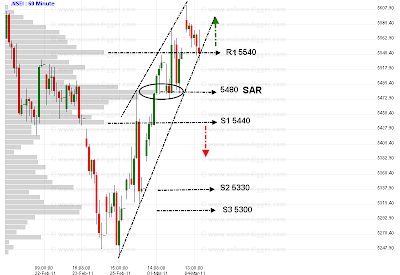 To check the end of this upmove we may keep an eye on the Hourly chart Channel.Trading below the Channel will indicate the temporary end of the upmove.The prices may reverse or consolidate below it. 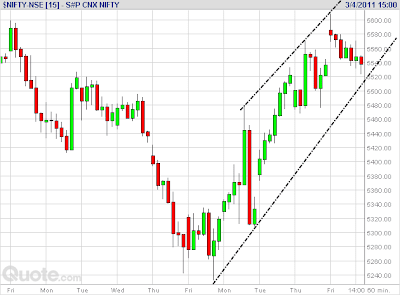 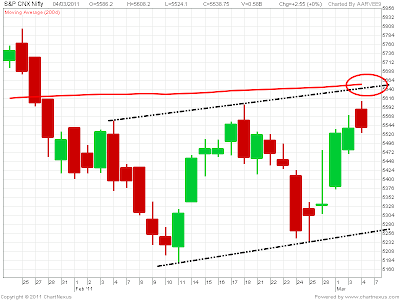 The Channel in the Daily chart shows the coming Resistance near the Top at apprx. 5650 level which is also near the 200dma mark. 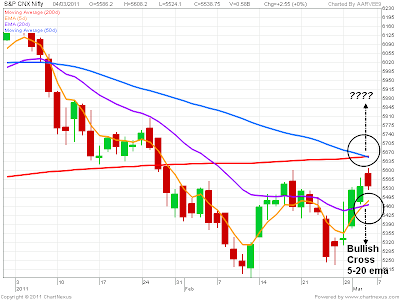 As mentioned in the Last Post - Interesting Charts ,
The coming Weeks will decide the major trend by trading above or below the 200dma mark at apprx. 5650 level. An important cross / touch & reverse of 50-200dma is round the corner.
Prices have closed above the Weekly 5ema and 20dema at apprx. 5465 , closing below which has probability to trade near the Week lema level at aprx. 5330. Firmly trading above 5600 level may bring the Monthly hema level of apprx. 5825. 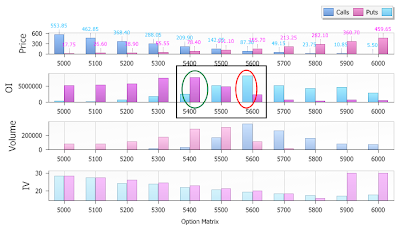 FII's have been net Buyers in the Cash as well as Derivatives section in the March series. 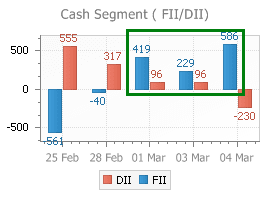 The last Wave count Post - Short Term EW Probabilities  is still valid.Please check the Post.
5700 is the game changer level above which the IV wave theory negates and upmove to apprx. 5900 and 6100 levels as in B wave may be seen.


So correlating the data above a likely Weekly strategy can be -

1. Keep 5480 as SAR initially.Trade long above it and short below it.

3. 5650 level is a strong Resistance. One may book profits here if the level is reached in first half of the Week. 5440 may act as a good support (Its also an imp. longterm Fibo.no. also)

4. Below 5440 we may resume downtrend again to 5300 levels, above 5650 we may reach 5800 level.These levels may mark the Weekly extremes and will require reveiw when reached.

Probability of Prices trading in the range of 5450-5650 is high. One may Trade on both sides of the SAR . Trade light this Week
Posted by AAR VEE at 2:00 PM

Dear Aarvee Sir,
you are making easy Ilango sirs comments in the very easy and lucid way. Keep it up. also be with just nifty to guide us.
thank you
Mahendra Jage

Its really a technical treat to read ur analysis, keep it up. My good wishes are always with you.

Your analysis is crystal clear and easy to understand. My best wishes to you.

Thanks for the comments here.Hope for ur support and regular visits .
Thanks.

Gives a clear picture to start the trade for this week. Thanks.

Sorry for the delay. But a lot of thanks to you. I have started to check the Profile charts from today itself, and it is helping very well. Thanks once again.

@Fire,
observe the developing profile and profile in different timeframes say 2d,5d,10d and then corelate to get useful info.I dont know how helpful will it be in intraday?

@U.K.Raj,
Try and trade both sides till it resolves itself,so keep booking at important daily pivots levels.Like trading below 5435 will be weak tomorrow and above 5480 will show strength.Levels are reference only ,one must see the actual price trading there and do accordingly in realtime.

Aarvee need your help. In your blog after every post there is no box of comments just a link of post a comment shows. In JN there is after all post only a box for comment shows but not a link of post a comment. I am not at all blogger but if you know why there is difference here and JN than please explain that cause i requested ilango sir as under and as he don't have time so you can help him to solve.

@IlangoSir a small request. In aarvee i can easily comment via my mobile's browser. But here i can't comment with my mobile browser. If this issue can solve than please do.

I didn't get exactly what u imply but the difference may be due to different templates that are being used .Each template has its own unique feature.

I think if this setting is done ,people browsing from mobile will be at ease.

(Another difference may be that my blog comments are placed as 'Pop-up Window' and Sir's Blog has it as 'Embedded below Post'.But i suppose it should not make a difference)

(Another difference may be that my blog comments are placed as 'Pop-up Window' and Sir's Blog has it as 'Embedded below Post'.But i suppose it should not make a difference) THIS IS THE SOLUTION. Thanks aarvee 4 helping i will request sir for this.

difficult job so many probablts

Thanx for followup post! this week has been very tough to trade...only SL hitting, no direction. hope 2morrow it gets resolved